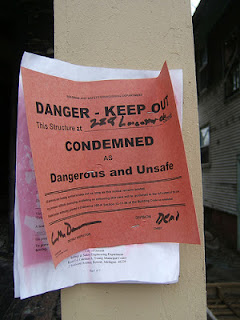 When a building is condemned, it is because the property fails to meet the established standards or criteria. Usually a warning notice is posted to warn the public that the building is considered unsafe to live in. Once a building is condemned, the owner must prove that problems have been fixed before anyone can live in or use the building.  To condemn means to judge or pronounce something to be unfit for use or service. It comes from the Latin word “condemnare” which means to sentence, or pronounce judgment upon.

Speaking to the early church, the Lord has declared in D&C 84, “because of unbelief, and because you have treated lightly the things you have received, which vanity and unbelief have brought the whole church under condemnation and this condemnation resteth upon the children of Zion, even all.”

The Lord continues to warn, “And they shall remain under this condemnation until they repent and remember the new covenant, even the Book of Mormon.”

In his conference address, President Benson reminded us of our condemnation that the church is still under. He said, “Let us not remain under condemnation, with its scourge and judgment, by treating lightly this great and marvelous gift the Lord has given to us.”

A few years ago, Elder Dallin H Oaks gave a talk entitled, “Another Testament of Jesus Christ” and repeated the Lord's statement that the Saints' conduct had "brought the whole church under condemnation."

In April 2009 conference, President Monson said “I am pleased to report that the Church is doing very well.”  So have we fixed the problem? Have we finally removed the condemnation that the church has been under for long? Is all well?
Nephi prophesied that in the last days that we will be led into carnal security and say that All is well in Zion. But Nephi warned, wo be unto him that is at ease in Zion and crieth all is well.

Just in case we haven’t lifted this condemnation individually, What are we to do? President Benson in his conference address, “Cleansing the Inner Vessel” declared how to lift the condemnation. “To do so,” he said, “we must first cleanse the inner vessel by awaking and arising, being morally clean, using the Book of Mormon in a manner so that God will lift the condemnation, and finally conquering pride by humbling ourselves.”

President Joseph F. Smith said " There are at least three dangers that threaten the Church within, and the authorities need to awaken to the fact that the people should be warned unceasingly against them. As I see these, they are flattery of prominent men in the world, false educational ideas, and sexual impurity." Joseph Fielding Smith, Gospel Doctrine, p.312-313

We should continue forward until the Lord pronounces us clean. The Book of Mormon contains the process we all need to go through. The Prophet Joseph Smith identified the process as well. Being Born Again, Having one’s Calling and Election made sure, Receiving the ministry of angels, and receiving the Second Comforter.