"and they who keep their second estate
shall have glory added upon their heads for ever and ever." 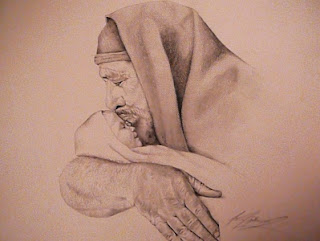 ABRAHAM:
THE FRIEND OF GOD because he was the FRIEND TO MAN.

From Abram to Abraham, to Father Abraham, we see a beautiful progression in names and titles being added upon to Abraham. Because of his lifelong practice of unwavering faith, God gave Abraham covenant blessings, including that his descendants would be as numberous as the stars.

His unquestioning trust in God and the beautiful friendship he built with the Most High brought these covenant promises into his family and they persist to this day.  Millions of Arabs acknowledge Abraham as their lineal parent, as do millions of Jews.  Latter-day Saints hold him as their forefather, as well as more than one billion other Christians and Muslims consider Abraham to be their father in a symbolic sense.

We read in Hebrews 11:  "But without faith it is impossible to please him:  for he that cometh to God must believe that he is, and that he is a rewarder of them that diligently seek him. By faith Abraham, when he was called to go out into a place which he should after receive for an inheritance, obeyed; and he went out, not knowing whither he went. For he looked for a city which hath foundations, whose builder and maker is God."

Hugh Nibley writes, "The wonderful thing about Abraham is that he always does the right thing, whether anybody else does or not. He had to get along with all sorts of people, most of them rascals, and he treats them all with equal courtesy—he never judges any man. After Pharaoh had tried to put him to death, and after he had taken his wife away from him, Abraham could still not refuse his old enemy in his need and laid his hand upon his head and healed him.

He was "the Friend of God" because he was the friend of man. Abraham knew that the priesthood operates "only by persuasion, by long-suffering, by gentleness and meekness" (D&C 121:41); it may command the elements and the spirits, "but never force the human mind."

When Melchizedek was instructing him in the mysteries of the priesthood, he told him that Noah and his people were permitted to survive in the ark "because they practiced charity." On whom? Abraham asked, since they were alone in the ark. On the animals, was the answer, since they were constantly concerned with their comfort and welfare.

Again, Abraham once beheld a great vision (described also in the Book of Abraham) of all the doings of the human race to come; what he saw appalled him—he had never dreamed that men could be so bad, and in a passionate outburst he asked God why he did not destroy the wicked at once. The answer humbled him: "I . . . defer the death of the sinner, [who might possibly] repent and live!"
Posted by BARE RECORD OF TRUTH at 8:44 AM 3 comments: