It was announced today that the new high rise office tower at City Creek has now received a new name. The new name is World Trade Center at City Creek.  From the KSL article, “Renaming the tower "builds upon the established achievements of City Creek’s revitalization efforts in the heart of downtown," said Mark Gibbons, president of City Creek Reserve Inc.  click here

The City Creek Reserve is a for profit real estate company owned by the LDS church. 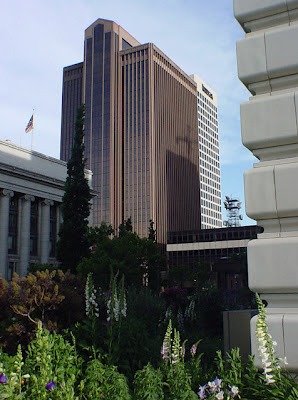 I wondering if naming a high rise building World Trade Center would be similar to renaming a new ocean liner cruise ship, the Titanic.
Posted by BARE RECORD OF TRUTH at 4:45 PM 10 comments:

In the last days there will be a division and separation into two groups. The two options are:

When does this separation happen? Are their signs happening now to point that the division is close? or possibly even happening now?

Both of the photos below are of the Terrestrial room in the Salt Lake Temple. (The photo on the left is from the 1993 March Issue of the Ensign entitled in “In His Holy House”. ) In this sacred room, there are TWO chandeliers that hang from the ceiling. Here, we make covenants that reinforce our faith and devotion to Jesus Christ, and promise to dedicate their lives to Him before we are invited to proceed further. We are symbolically like one of the virgins in the parable preparing to meet the Bridegroom and be invited into the marriage feast.

Last week, I received word from a friend who is a Temple Sealer at the Salt Lake Temple. He told me that one of these two chandeliers fell from the ceiling sometime during the night of May 16, 2012 and came crashing down . Fortunately, the damage and broken chandelier was quickly cleaned up early in the morning before the temple patrons arrived. While a possible cause of this chandelier falling could be the result of an old chord in need of replacement, I find this accident to be highly symbolic. It is symbolic of the two separate groups in the last days before the Bridegroom comes and being in His presence.  One chandelier shining with light, the other scattered to the ground. One still with power, the other with the power line cut.

A few scriptures of the symbolism of a separation: We read  in Joseph Smith Matthew 44-48:

Then shall be fulfilled that which is written, that in the last days,

“And at that day, when I shall come in my glory, shall the parable be fulfilled which I spake concerning the ten virgins. For they that are wise and have received the truth, and have taken the Holy Spirit for their guide, and have not been deceived—verily I say unto you, they shall not be hewn down and cast into the fire, but shall abide the day.”