“These are the feasts of the Lord, even holy convocations,
which ye shall proclaim in their seasons.”
Leviticus 23:4

The word ‘Feast’ is a King James translation. The word ‘Feast’ comes from the word that means ‘appointment’. When we hear the word “feast”, we think it refers to a time to eat alot food, but the actual meaning of the word ‘feast’ is an “appointment” of the Lord, even a Holy convocation. The word 'convocation' means a “called assembly.” Another literal meaning of the Hebrew word, ‘mikraw’, or 'convocation' is a 'rehearsal' - rehearsal meaning to "re-hear" what has been taught, but the modern-day accepted meaning of rehearsal, is a practice session for a later event.

Thus, the above scripture in Leviticus means these feasts of the Lord are: an appointment to practice for an coming event and/or rehear what has been taught.
There were seven feasts or “ appointments” that were to be rehearsed seven times a year in their appropriate season. So we are to rehearse seven times a year what you are to “do” or better what you are to “be” because you have an appointment with the Messiah. So you must come to rehearse how to come meet your Messiah when He does come.

The first Fall feast is Rosh Hashanah which is known as The Feast Of Trumpets. Rosh Hashanah is  celebrated both in joy and solemnity. Jews believe that God's judgment on this day determines the course of the coming year. On this feast, a ram's horn, or in the Hebrew, a shofar, was blown as well as eating symbolic foods such as apples dipped in honey. The blowing of the shofar is a call to repentance and a return to God.  It is interesting that it was Moroni who appeared to Joseph Smith every year for 4 years on the Feast of the Trumpets, on the Fall Equinox. We also have Angel Moroni blowing a trumpet on top of our Temple as a possible symbol of this feast and the need for the call to repentance.

It is interesting on what would also happen on the Feast of Trumpets. In the Jewish religious text , it states that three books of account are opened on the Feast of Trumpets, wherein the fate of the wicked, the righteous, and those of an intermediate class are recorded. In between the Feast of Trumpets and Yom Kippur (Day of Atonement) are 10 days, known as the Ten Days of Awe. This is a time for serious introspection, a time to consider the sins of the previous year and repent before Yom Kippur. In addition, it is common to seek reconciliation with people you may have wronged during the course of the year At the beginning of the Feast of Trumpets, the names of the righteous are immediately inscribed in the Book of Life, and they are sealed "to live." The intermediate class are allowed a respite of ten days, until Yom Kippur, to reflect, repent and become righteous. The wicked are "blotted out of the book of the living forever.

There a few minor errors in the calendar below, but hopefully it gives the overall idea of when these feast occur.  While we can debate when these feasts actually should occur, it is more important to understand the meaning of the feasts than which day it actually falls on. Below are the dates currently being observed within the Jewish faith in 2012. Although the Jewish calendar is based on the lunar cycle, so that the first day of each month originally began with the first sighting of a new moon, since the fourth century it has been arranged so that Rosh Hashanah never falls on a Wednesday, Friday, or Sunday, currently the Jewish festivals follow the Gregorian calendar. 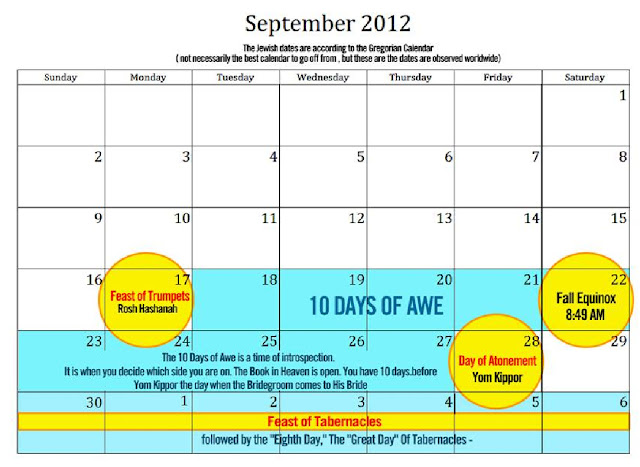 According to the Gregorian calendar, The Feast of Trumpets begins after sunset on September 16, 2012 through the nightfall September 18, 2012. The Feast of Trumpets is a 2 day feast because it is the only Feast of The Lord that no man know the day or hour, no not even the angels. To this day it remains a 2 day celebration because no man knows the exact day or hour of the FEAST of TRUMPETS.
Posted by BARE RECORD OF TRUTH at 12:07 PM 11 comments: