WHAT ARE THE BOUNDS THAT THE LORD HAS SET?
About 400 miles directly west of Salt Lake City is the Black Rock Desert. Every year 10's of thousands of people gather at an event called the Burning Man. It is being held this weekend over Labor Day. It gathers like minded people who do not believe than anyone has the right to a dictate how people should be and/or act. There are no bounds. A month from now, 10's of thousands of people will gather in the LDS Conference Center at an event called General Conference. It gathers members of the Church of Jesus Christ of Latter-day Saints whose views are in extreme opposite to those who probably attend Burning Man. The members follow a very strict adherence to how they should be and act.  I created a chart to show the differences. 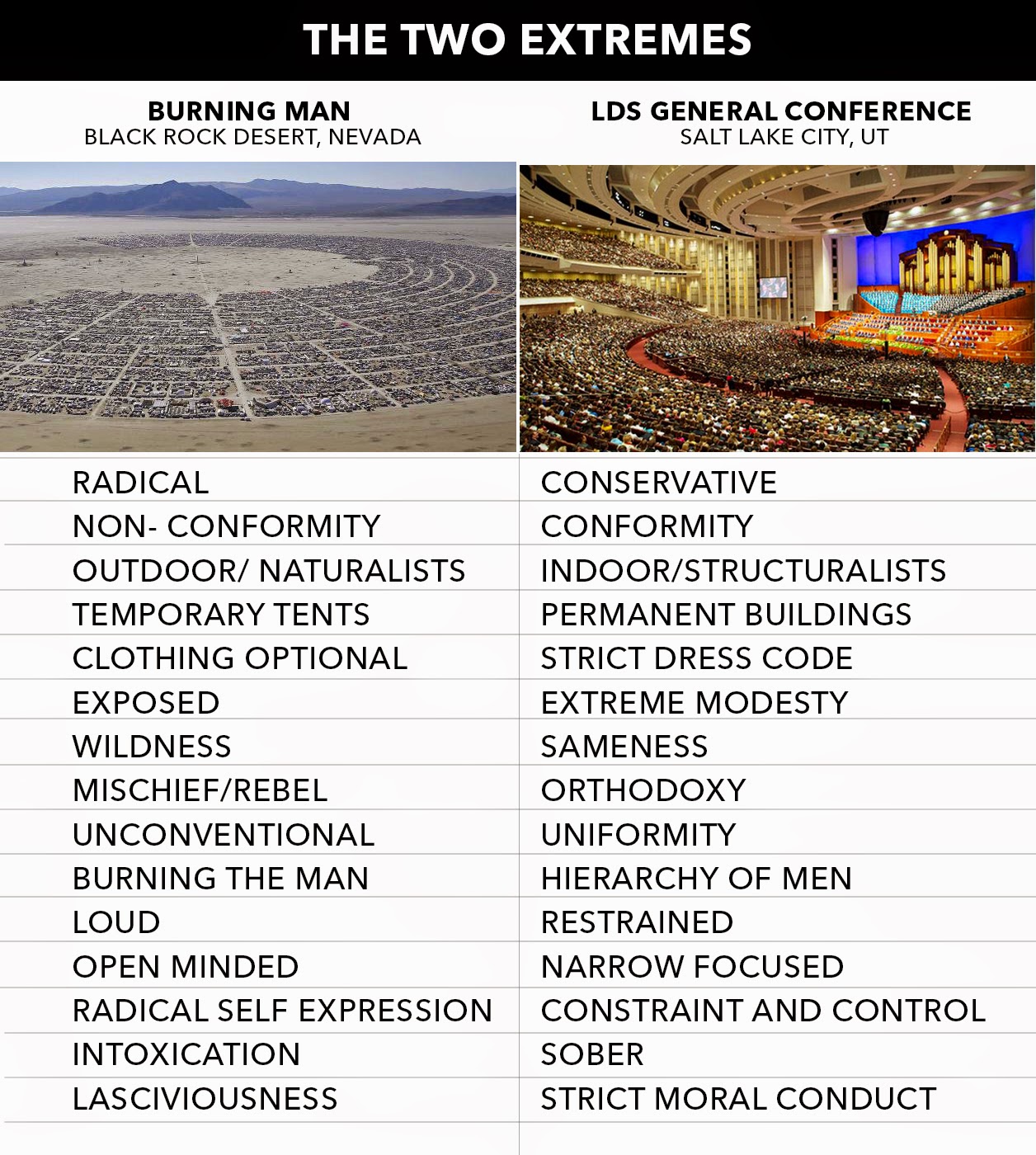 ﻿
I post this only to ask a few questions.What are the bounds that the Lord has set? On one side of the spectrum, there are no bounds.... On the other side of the spectrum, is there too much control and too many bounds? Is there even a happy medium? What is the undeviating course we should follow and adhere to that leads to eternal life? Does the Lord expect us to follow codes of conduct in what we wear, drink, eat, say, or do?  If so, what exactly are those, and is it different for each individual or the same for all of us?
Anyway something to thing about this Labor Day weekend..

There are always two sides to every story.  However, usually only one side gets told and recorded as history. History is always written by the winners and not the losers. "When two cultures clash, the loser is obliterated, and the winner writes the history books-books which glorify their own cause and disparage the conquered foe." Dan Brown.
After the death of Joseph Smith Jr. and his brother Hyrum, the well known stories and early history of the Restored Gospel were written primarily through the voice, lens and perspective of Brigham Young and the Saints that traveled west into Salt Lake. Little is known about what happened to the Saints who stayed behind in Nauvoo. We don't often talk about or the hear stories of Emma and her children and the rest of Joseph Smith's family after the prophet died.
On my recent trip back to Nauvoo, I learned that Emma was over 4 months pregnant with a son when her husband, the Prophet Joseph Smith was killed at Carthage Jail. Emma gave birth to a son on November 14, 1844, about five months after the death of the Prophet. She named him David. Below is a picture of Emma and her baby son. Tragic to think that Emma not only was mourning the death of her husband, but as a widow, she would be giving birth to a son who would be fatherless. 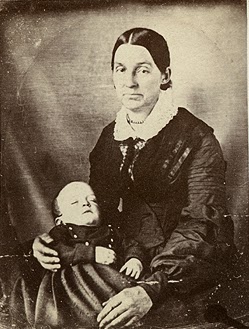 David was the youngest of the nine children born to Emma and Joseph.  However, there were only four surviving siblings at the time of his birth:  Julia (adopted), Joseph III, Frederick, and Alexander.

Joseph and Emma's first child was Alvin who died at child birth having undescribed birth defects. Emma then conceived twins, Thaddeus and Louisa, but both died a few hours after birth. On that same day, John and Julia Murdock, friends of Joseph and Emma, also gave birth to twins. John Murdock, who upon his wife's death in childbirth, gave the infants to the Smiths for adoption. The twins were named Julia (named after her birth mother) and Joseph. Joseph, the adopted infant, died a year later from exposure (many accounts say pneumonia) following a mob attack on the Smith home on the night of March 24, 1832. Joseph and Emma then had six sons. Joseph Smith III, Frederick, Alexander, Don Carlos (died at age 14 months), a stillborn male child, and then David.

David was three years old when his mother married Louis C. Bidamon.  Below are a few photographs of David. The photo on the left is David at age 16, and the photo on the right is when he was in his twenties. 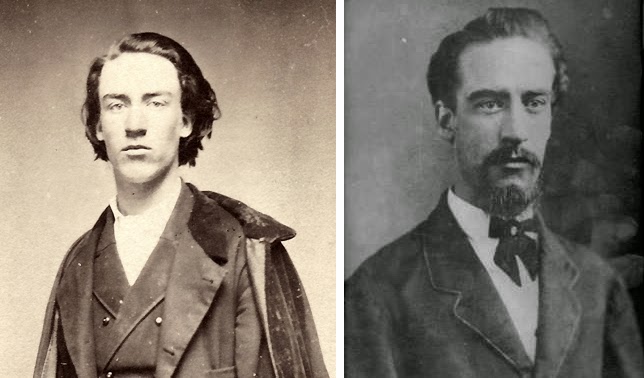 In his youth, David became an accomplished poet and musician. He was around sixteen years old when his brother Joseph III took leadership of the Reorganized Church of Jesus Christ of Latter-day Saints in 1860. Like his father he never knew, David became devoted to God and the cause of the Restoration.  He touched the hearts of the Saints with his wonderful hymns of faith. Never having known his father, he penned a sad ballad entitled, “The Unknown Grave” which tells of the death of his father, his uncle Hyrum, and their sacrifice for the cause of the gospel.

In addition to his writing, David also was a artist. Below is his painting of Lehi's Dream. Probably one of the first illustrations of the Tree of Life illustrating the vision that Lehi and his son Nephi describe in the beginning chapters of the Book of Mormon. 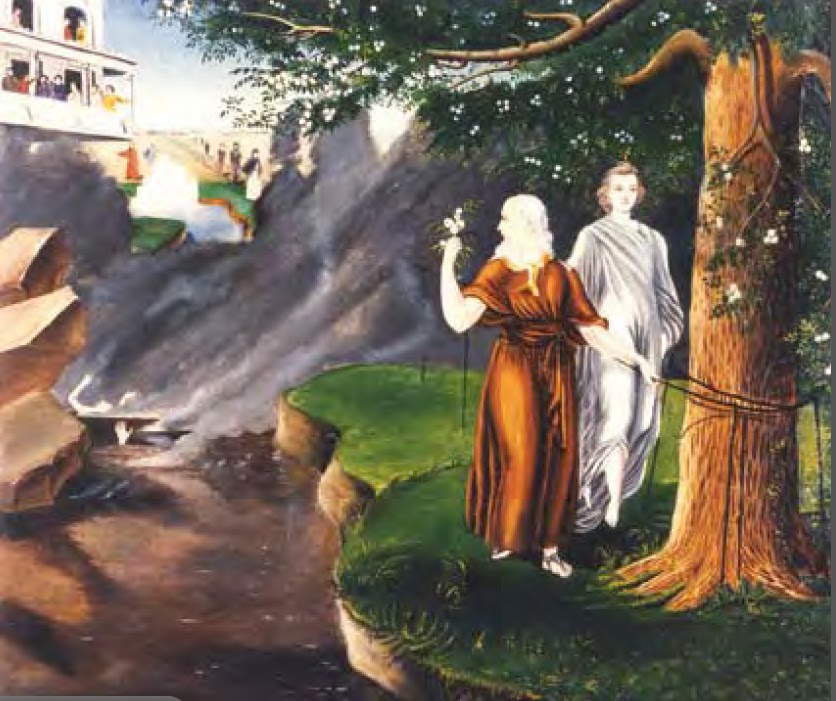 David fell in love and married Clara Charlotte Hartshorn. They had one son, Elbert.  There is a sacred spot, located about a mile south of Nauvoo, that is known as David's Chamber.  David would often come here to meditate, pray, write poetry, and paint pictures. David’s son, Elbert A. Smith, described this beautiful and tranquil location:

"A little way down the river from the Mansion House, and back in the hills, there was a waterfall and above the fall among the rocks and trees there was an amphitheater which I have been told by numerous people was a favorite resort to which father went as a lad to read and write and paint."  (Elbert A. Smith, On Memory’s Beam, p. 37)

Throughout his life, David had health problems. He was diabetic and also suffered from depression. After hearing the stories and beginning to believe that his father Joseph Smith had indeed practiced polygamy started to have problems of doubt and instability. Later in life, David was hospitalized until he eventually passed away at age 60.
.....
I share this information because most of us, if not all, in this life encounter times of doubt, insecurity and sadness.  What did Joseph Smith do in the times of his life when he has doubt and sadness? 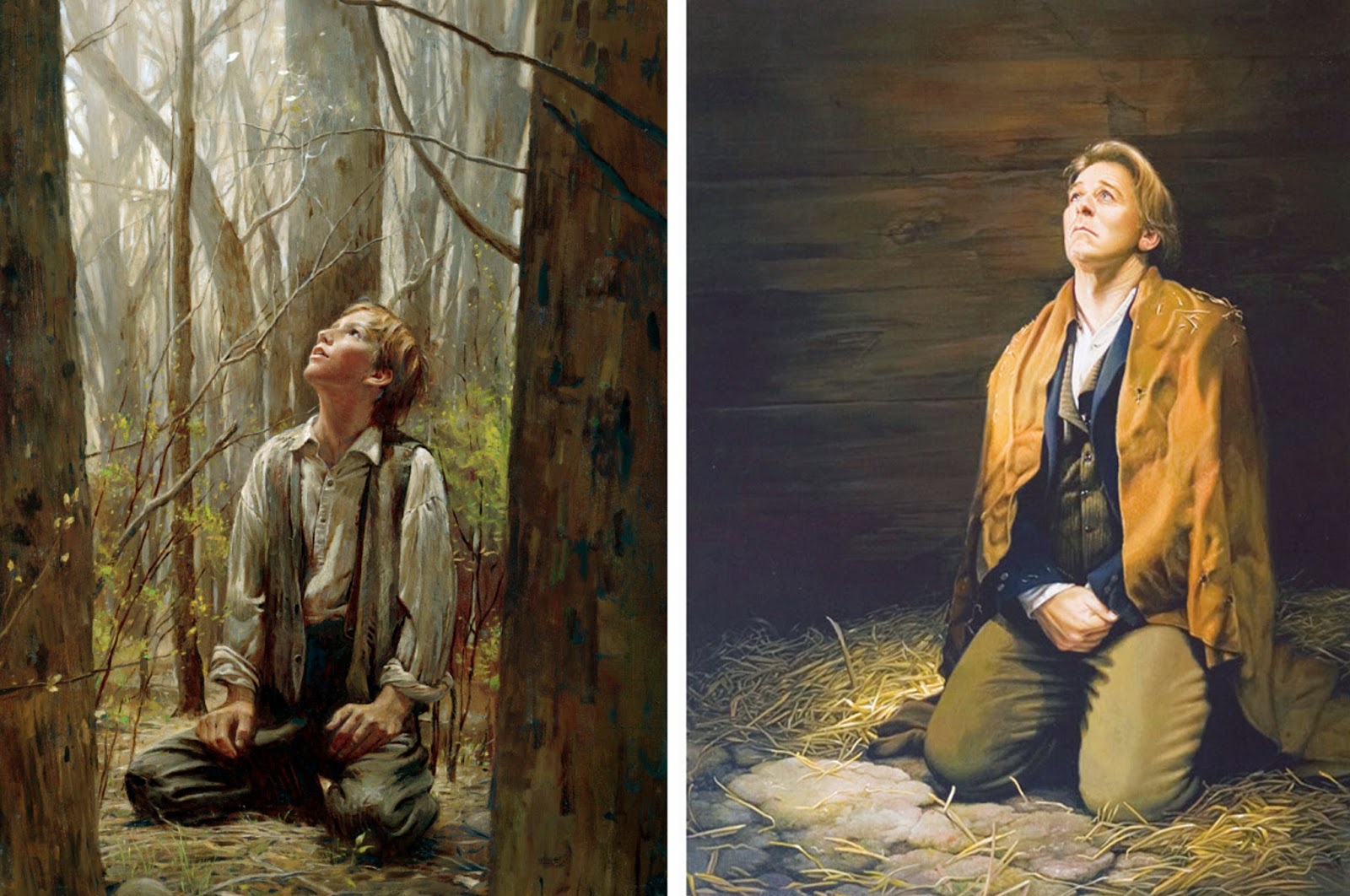 He cried unto the Lord.

A few years ago I spent a couple days in Montana and South Dakota. We had a special permit to enter onto the Blackfoot and Lakota Indian Reservations. We hiked and spent sometime in the mountains. I was invited by a good friend of mine who was going up with his younger brother. We had some amazing experiences that I will never forget.  I received a phone call from my friend informing me that his younger brother who had become my friend had just passed away this week. His funeral is tomorrow. In his honor, I am posting a few photos from our trip on pristine Native American soil. 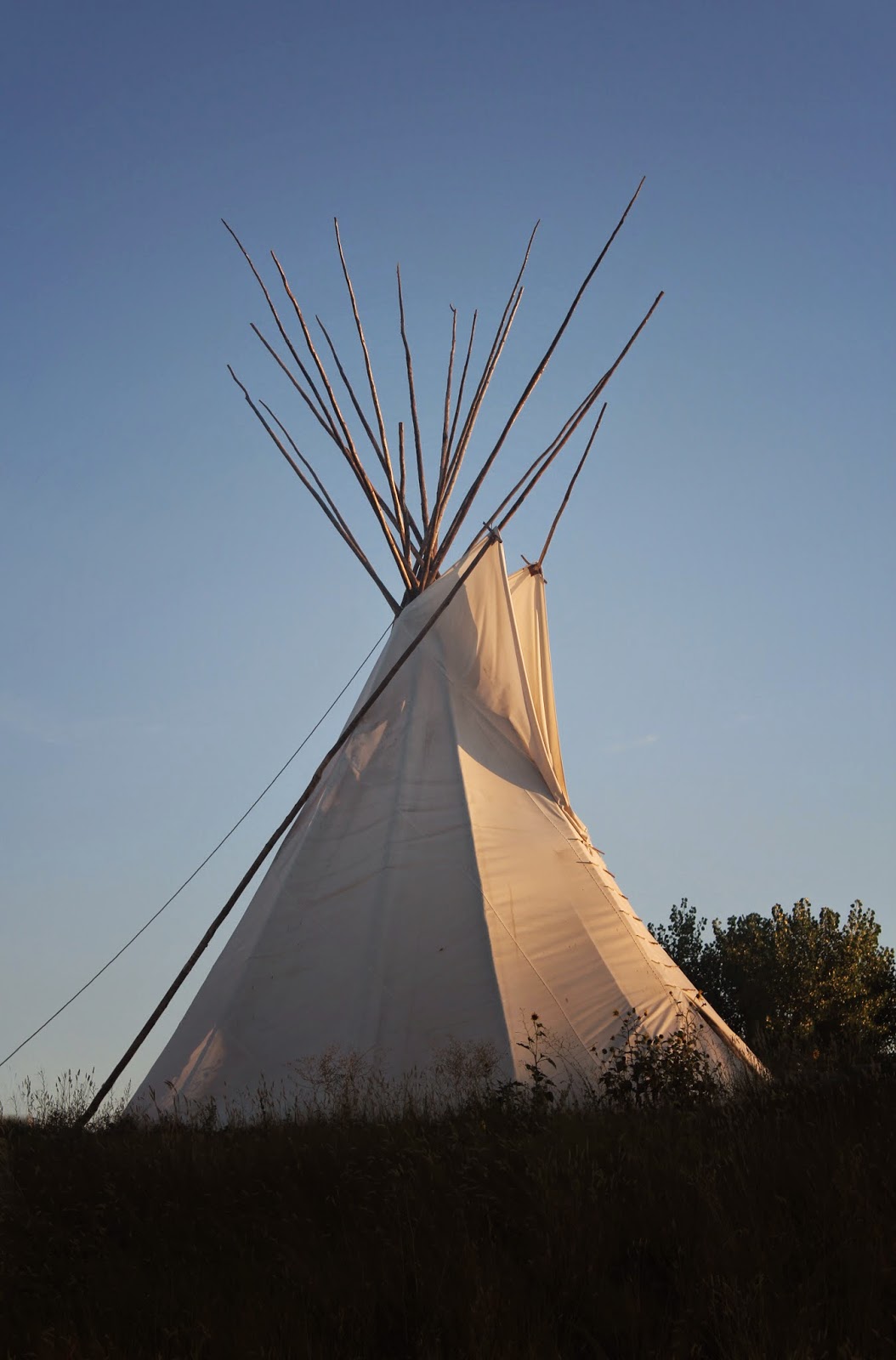 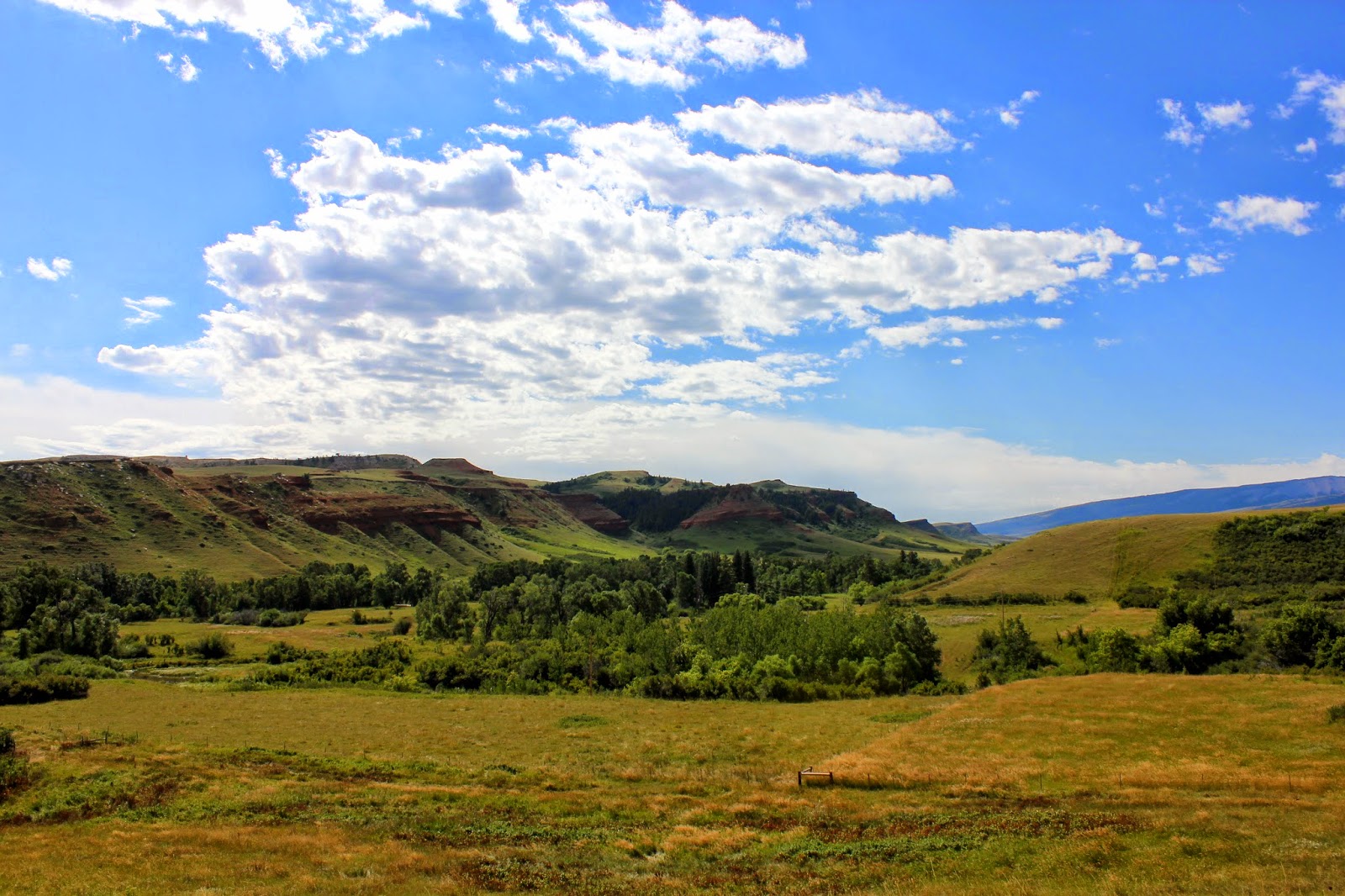 I heard this song today. I think the words are powerful.

To everyone who's lost someone they love...long before it was their time
You feel like the days you had were not enough when you said goodbye

And to all of the people with burdens and pains.. keeping you back from your life
You believe that there's nothing and there is no one, who can make it right

For the marriage that's struggling just to hang on...they lost all of their faith in love
They've done all they can to make it right again, still it's not enough

For the ones who can't break the addictions and chains,
You try to give up but you come back again
Just remember that you're not alone in your shame and your suffering.

When your lonely, and it feels like the whole world is falling on you
You just reach out, you just cry out to Jesus. Cry to Jesus.

To the widow who suffers from being alone...wiping the tears from her eyes
For the children around the world without a home, say a prayer tonight

There is hope for the helpless
Rest for the weary
Love for the broken heart
There is grace and forgiveness
Mercy and healing
He'll meet you wherever you are
Cry out to Jesus, Cry out to Jesus

We will miss you James. May the Clarks be comforted at this time.
Posted by BARE RECORD OF TRUTH at 8:11 PM 3 comments: