This post concludes the series on King Noah and Abinadi written by a friend. I tried to include a different image that we normally don't see along with each post. Below is the last, but the most common depiction we are used to seeing, but I have made it abstact. Using shapes and colors we form a pictures in our mind....Sometimes we think we can see clearly, when we are actually blind. False assumptions and traditions handled down through the generations cause us err in truth. Hopefully after reading all eight parts has changed your paradigm on this very important story found in the Book of Mormon. 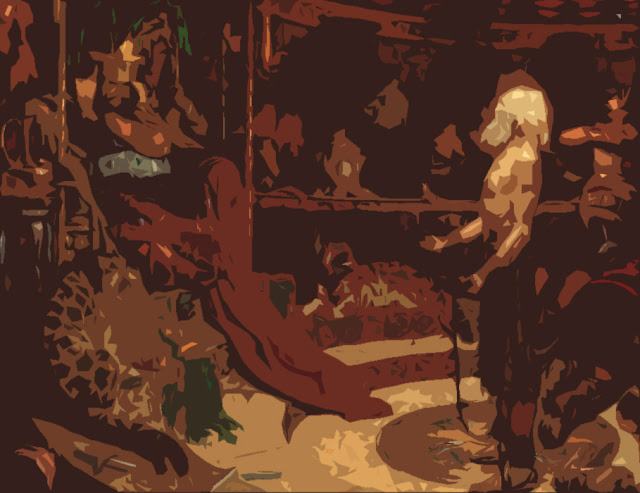 .
The Prophet Abinadi, Part 4, Conclusion
.
“Now the eyes of the people were blinded; therefore they hardened their hearts against the words of Abinadi, and they sought from that time forward to take him. And king Noah hardened his heart against the word of the Lord, and he did not repent of his evil doings”
Mosiah 11:29.

King Noah chose not to repent after hearing the Lord’s invitation. Though he may have almost been persuaded, it is more difficult to do what is right when supported by “friends in iniquity” (Mosiah 17:11; 29:22-23). To trample under-foot the commandments of God is a fearful thing to undertake in solitude, so the coward seeks to be upheld by a support group.

The king and his people had at least a couple of years to think about Abinadi’s initial message (Mosiah 12:1). Because they “hardened their hearts against my words,” the Lord commanded Abinadi to return again and prophesy to the people (ibid).

God calls king Noah and his people “this my people” two times (vv. 1, 4). We tend not to think about them this way when we read and tell the story. What does it mean that the Lord called them “this my people?” Does it mean that they were chosen? What about the people of the kingdom under Zeniff? Were they a chosen people? If chosen, and if the Lord’s people, what lessons can we learn from them? The Lord has also called the latter-day saints “my people” throughout our revelations (D&C 105:6; 119:3; 124:92, and many more). What does it mean to be the Lord’s people?

The things covered in a short four-part series on Noah and then on Abinadi only begin to investigate the text in an honest way. There is much more to the story we have left unexamined.

Chapters 12, 13, 14, and 15 are far more doctrinally rich than the few verses we’ve looked at in chapter 11. In chapter 12, Abinadi begins teaching them of Isaiah’s writings, and warns them about setting their hearts on riches. In 13 we see God’s messenger speak with “power and authority from God,” and how the hand of the Lord protects those who have a divine commission, or “keys,” to bring a message of repentance until they’ve done all that is asked of them. He teaches them of the Ten Commandments, because they need reminding on what it really means to live them. Chapters 14 and 15 are rich in Christological content.

On the whole, this story is a Godsend for us who inherit the book in the latter days. God desires “this my people” to understand how to come unto Christ and be saved. Christ warned us to “beware of false prophets,” and has given to us in the Book of Mormon tools by which we may discern true prophets (3 Ne. 14:15). They preach repentance, just as Christ invited all to repent and come unto him. Abinadi is a prototype prophet because he is a type of Christ. What is it that you can learn from him?