99: RECEIVING THE HONORS OF MEN

Here is the half page invitation that appeared in the Deseret News Sunday's edition
to invite all those who would like to join in the celebration. 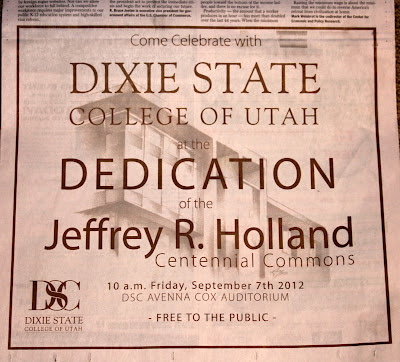 Tomorrow will be an exciting day for one of the Apostles, Elder Jeffrey R Holland. A six-story 170,000 square foot building which towers above the school campus in St. George will be dedicated and receive his namesake.  The formal ceremony begins at 10 a.m, and will include remarks from Elder Jeffrey R. Holland. The dedication festivities will include the official ribbon cutting ceremony, followed by the dedicatory prayer offered by President Dieter F. Uchtdorf, second counselor in the First Presidency of the LDS Church. Following the ribbon cutting, Dixie State will host an open house with refreshments. link to story

Mitt's Romney's VP selection, Paul Ryan flew into Utah yesterday. There has never been more excitement for our Mormon Presidential Candidate and his Vice President choice than after the Republican National Convention last week. It was a perfect time for Paul Ryan to come to Utah while the enthusiasm is at it's peak. His main reason was to receive money donations. He only meet with the very elite, and prominent members supporting Romney. If you were willing to spend 25,000.00 dollars per plate,. you had the privilege to have an exclusive dinner with him. If 25 grand was too much for you to spend, you had the option to spend  just 3,000.00 and shake his hand at a VIP reception.  A general admission ticket where you might only be able to see him from a distance was 1,000.00 per ticket.

I had a lot of respect for Paul Ryan when I heard him say in a radio interview before his RNC speech last week that he had run a "2 hours and 50 something" marathon. After running a marathon myself, anyone who can run a sub 3 hour marathon ranks very high on my list. They would be classified as an "elite" runner.

However, it was just recently discovered that Paul Ryan had exaggerated his time, and the one and only marathon he ran was a time of 4 hours,1 minute and 25 seconds. For those of you who have run a marathon you know your time just as well as you know your birthday. You never forget your time.

It is always a difficult thing when the truth is exposed.

When we make false claims to receive more honor, power or credibility in the end destroys not only the person who made the claim, but those who follow them.
We would do well to give greater heed to the words of the prophets in the Book of Mormon.