A couple of weeks ago I attended BYU Education week. One of the speakers was Thomas Wayment, a Professor of Ancient Scripture at BYU and the publications director at the Religious Studies Center. He is currently serving as a Bishopric counselor. He shared in his first class that the Church is estimating right now that 60% of all returned missionaries will leave the church. They say that of the 60% that leave the Church, roughly 20% of those will come back. We are retaining of all those who serve missions only around half. He said that these statistics were given at a recent Leadership Training Meeting about six months ago, but are not published..But he didn’t think that means that this information was secret or not to be shared. Another statistic that he gave was that only 12 to 15% of young men actually serve missions. Those are not good numbers. So basically, with the current hastening of the work with over 80,000 missionaries serving, if these numbers are accurate, a little less than half end up leaving the Church or becoming inactive during their life.

In an article on msn.com ( LINK ) the following was reported, "While an estimated 40 percent of returned missionaries become inactive sometime after completing their mission, only 2 percent become apostates, meaning that they request to have their names removed from church rolls, or are formally excommunicated."

A recent study in 2013 at Utah Valley University ( LINK ) found that nearly three quarters of missionaries who return home early experience a deep sense of failure.

A friend of mine sent me a article written by Hal Lindsey, an American evangelist and Christian writer, which said the following, "The modern church is miles wide and inches deep. We try to convince the world that they should accept us because we are like them, not because we have the answer or because we stand for something greater." He went on to describe today's lukewarm Church. It isn't cold enough to be easily identified as a false Church that has lost its fundamental purpose.... and it is not hot enough to preach the Gospel and make disciples no matter the cost in persecution and sufferings for Christ's sake. We have forgotten that it is either all about Him or not at all about Him."

Is statement only apply to the other Christian denominations or can it be said about our Church as well?

Last week I went to one of the first public screenings of “Meet the Mormons”, the new full length motion picture that will be released in select theaters nationwide. The Church is beginning to promote this movie including billboards along the Interstate 15. In next month’s General Conference, the movie will be mentioned in one of the Brethren’s talk, rumored to be Elder Holland. It has been under production for four years. It opens on October 10, 2014. I have written a little bit about it ( HERE ) 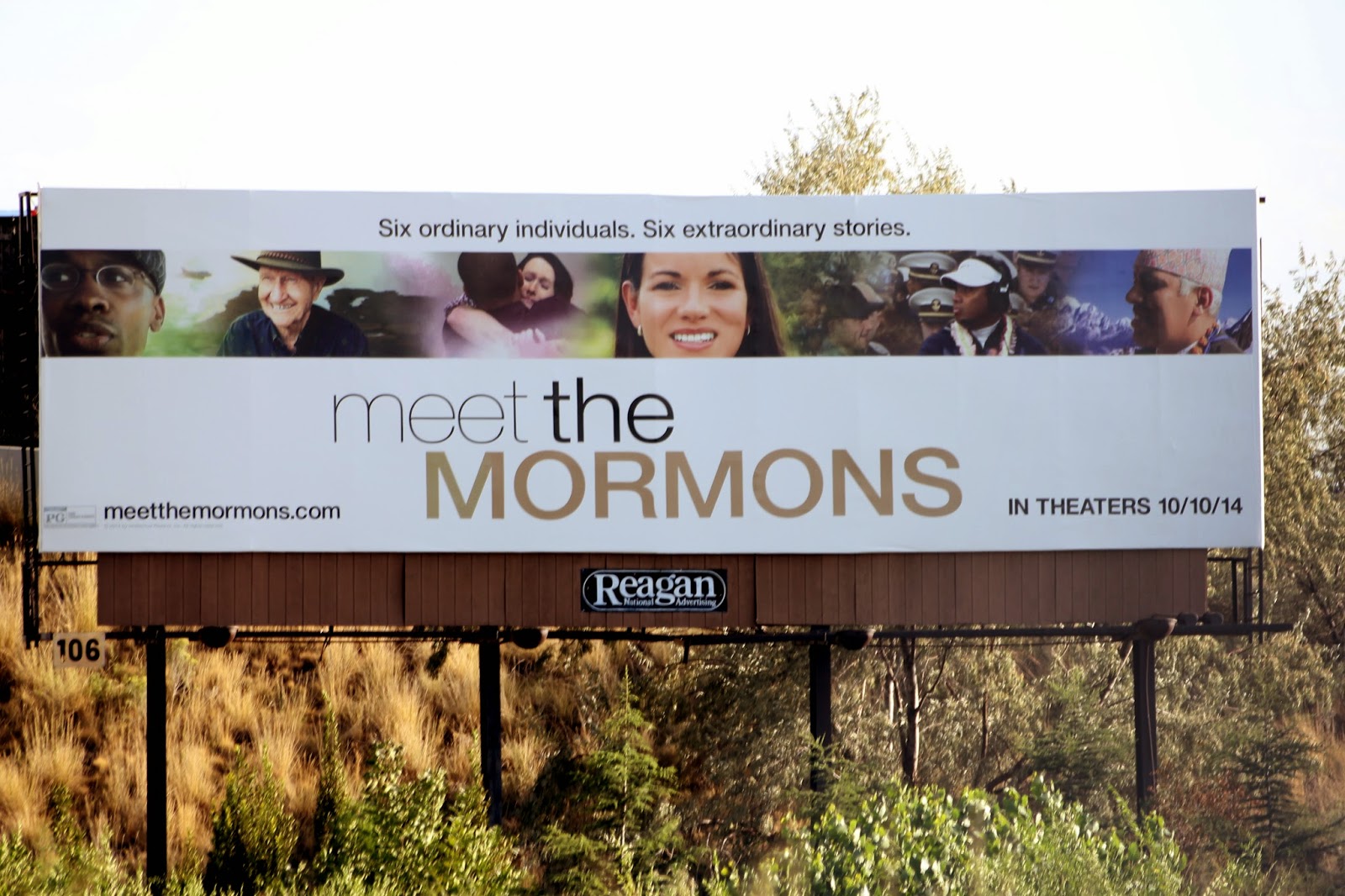 I really don’t like hearing about movies until after I see them..so I won’t really share much about my feelings… since I like to go without having any prior expectations (either low or high). That being said.. one might think this is the best movie and is part of the Lord’s hastening the work.. or another might think the stories, the people, and the locations were carefully selected in this movie as a type of promotional infomercial. No doubt, we want to be a Global church and like what Hal Lindsey said.. we want to convince the world that they should accept us because not only are we wonderful people, but we are like them. (Sidenote: For example, the only two Bishops that are shown in the movie are both Afro-American, as well as one of the featured members receives an award from President Obama and actually shows him receiving a hug from the President.)

No doubt we as a Church want to proclaim the Gospel to all people around the earth. I can think of no better Church that spends its resources to accomplish this... But to what end? What is considered success?

Is success for the Church only bringing thousands of people to the bottom of the Mount Sinai... only to eventually be told to just follow and/or worship another idol? Or is success for the Lord actually through teaching, guiding, encouraging those to accept the invitation from the Lord and ascend to the top of Mount Zion and speak with Him face to face.
Posted by BARE RECORD OF TRUTH at 2:33 PM 5 comments: