Before I go to bed at night, I open our front door and let our dog out. If I am not careful while the door is open,  flying insects will see our inside house lights and immediately fly in from the darkness and into our home. Bugs are attracted to light. We prefer not to have bugs flying freely in our home, so I am really careful to not keep our door open when it is dark outside... (plus we try and keep the heat inside the home and not escape out into the cold.) 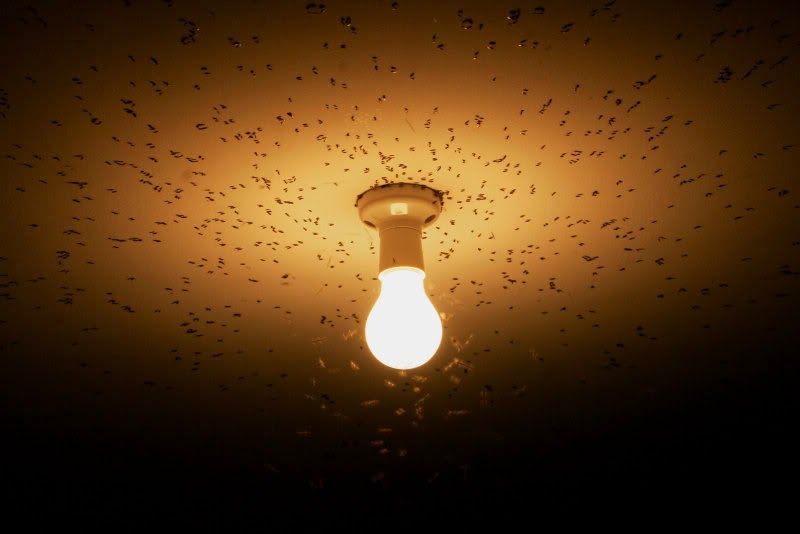 Whenever there is an increase in spiritual manifestations, there is always an increase in both true and false spiritual phenomena. When you have more light, it is usually accompanied by more darkness. You do not get one without the other. All of us will sooner or later be confronted by false spirits and/or be invited to participate in gatherings where they are present. Many amongst us are going to be seduced by false spirits and be deceived. Others will be able to discern between the two and avoid the deception. False spirits abound all around us. Those who want to lead others, have an audience or following can easily be misled. False spirits can prop up our egos and feed our pride... which eventually will lead to mischief and ultimately darkness.

These things are all around us. But this is how it should be.

The false spirits need to be unleashed. They need to be exposed. We have a choice to either withdraw from it, or join the deception. In the process, there will be some ugliness. Zion can not happen until those false spirits have been identified and weeded out from the community.

Ambition in spiritual gifts leads to acceptance of evil influences.

I recently read the following. "In Kirtland, new converts who were overzealous to participate in the new heavenly manifestations coming as a result of Joseph Smith's claims, opened themselves up to receiving influences they could not understand, and did not test for truthfulness. They were so delighted to have any kind of experience, they trusted anything "spiritual" was from God. As a result, there were many undignified things, degrading conduct, foolish behavior and evil influences which crept in among the saints. Joseph received a revelation in May 1831 concerning this troubling development. In it the Lord cautioned there were "many false spirits deceiving the world."  That Satan wanted to overthrow what the Lord was doing. The presence of hypocrites and of people harboring secret sins and abominations caused false claims to be accepted. It is required for all people to proceed in truth and in righteousness if they are going to avoid deception. Meaning that unrepentant and unforgiven men will not be able to distinguish between a true and a false spirit. Just because you have a "spiritual experience" you cannot trust it will invariably be from God."  (Read D&C 50: 1-9). As part of the same problem in Kirtland, in September of the previous year, Hiram Page wanted to be like Joseph, and was able to attract a deceiving spirit to communicate with him through a seer stone. But the commandments he received were designed to lead him into error.

Here is a quote from History of the Church concerning a branch of early saints in Kirtland, 1831.

"The branch of the Church in this part of the Lord's vineyard, which had increased to nearly one hundred members, were striving to do the will of God, so far as they knew it, though some strange notions and false spirits had crept in among them. With a little caution and some wisdom, I soon assisted the brethren and sisters to overcome them." (HC 1:146)

How do we discern between strange notions and correct ones.. between false and true spirits?

Here is some guidance I read. "All spiritual gifts, including distinguishing between true and false spirits, requires the Holy Ghost, given through obedience to the truth, which allows a person to distinguish between truth and error.  The truth is like light, and when you follow the light of truth it grows inside you until you have a "perfect day" in which there is no more darkness, but everything is illuminated by the light of the spirit within you."

But this only comes as a result of repenting of all sin. Truth will not leave you confused, but will enlighten your understanding.

From this you can see how necessary it is for each of us to continually repent, conduct our lives in conformity with such truth as you presently understand, and avoid deliberate wrongdoing in order to be able to distinguish between a true and a false spirit. You must attract light. It is attracted by obedience to such light as you already have. When you proceed forward using the light you already possess to attract more light it will grow in one, consistent and truthful manner from a lesser to a greater light. All of it conforming to the teachings of Jesus Christ.

Do not think all spiritual experiences can be trusted. There is no difference between the activities of deceiving spirits today and those in Kirtland, as well as those in the New Testament times. If you follow the Lord you must still test the spirits and only follow those which point to Christ. Even Joseph Smith had to ask God about some of the phenomena going on in Kirtland before he knew which were of God and which were deceiving.

And lastly... As far as gathering, there is no reason to gather to fail again. Without appropriate preparation of people beforehand, angels will not gather them in. Angels do the gathering, not men. Not even men with good intentions. Zeal and haste will prevent Zion from coming and will destroy it if it's here.