186: EROSION: THE BEGINNING OF THE GREAT DIVIDE 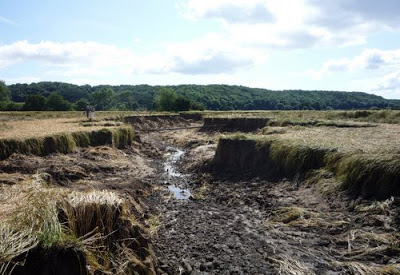 One word came to me today. The word was erosion. Erosion is the gradual wearing away, the process of undermining, of deterioration, of weakening to a state of final destruction of. What is interesting is that erosion usually divides. A gulf is formed where there are two sides. You can no longer stand on middle ground or if you are, as shown in the photo above, you would be standing in mud.

Today is a historic day. The Supreme Court ruled that part of the Defense of Marriage Act is unconstitutional on June 26. In a pair of landmark rulings, the Supreme Court struck down the Defense of Marriage Act, giving married gay couples access to federal benefits — and declined to rule on Prop 8, paving the way for same-sex couples to wed again in California.
Here is a photo taken this morning in front of the Supreme Court. What caught my eye was the scaffolding around the building. The U.S. Supreme Court Building's West Front Façade is undergoing construction to address deterioration and erosion due to age, weather and nature. Years ago, a modillion (a support projecting from a wall) from the pediment cornice failed and fell to the ground. Emergency repair work has been performed on the West Portico over several years during summer recess of the Court, but now full restoration work is underway. I find that symbolic. 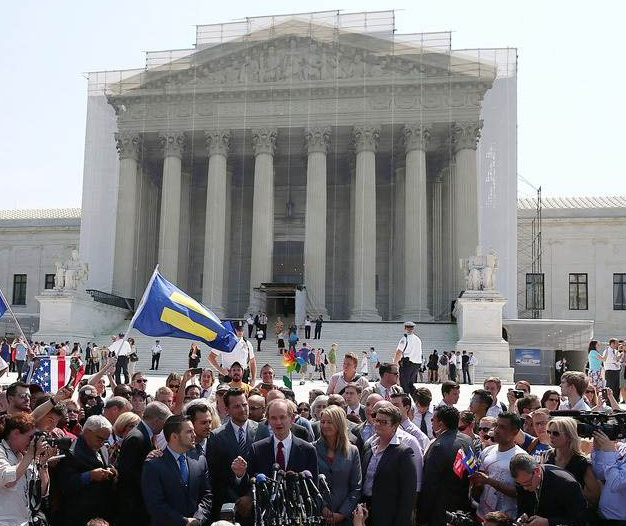 Here is a photo of some LDS supporters of the decision for Marriage Equality. 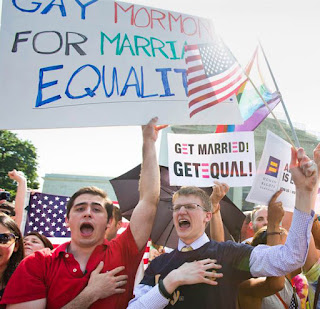 Edith Windsor, the 84-year-old woman who brought the case against DOMA, said that the ruling ensured that the federal government could no longer discriminate against the marriages of gays and lesbians. “Children born today will grow up in a world without DOMA, and those same children who happen to be gay will be free to love and get married,” she said.

A few weeks ago on the front page of MSN.com, there was an article on how new parents keep their relationship strong. See the photo of these two men. The photo suggests that these two men are the parents of this baby.  Our world is becoming ever more confused. My heart is saddened to think that children will be raised without ever having a female mother... or for that matter, a male father. 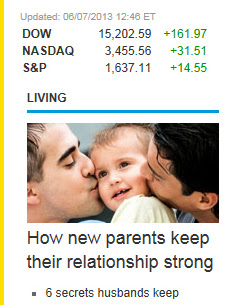 Bottomline: From the beginning of time, Satan's main purpose was to separate the man from the woman which started in the Garden. And if Satan could divide, he could conquer and defeat them. There is power in the couple of man and woman. It is creative power. It is the same power of God which is to bring forth new life. The divine couple of male and female when "fused" together is limitless... any other  type "fusing" is an abomination of desolation.
...