475: DESERET NEWS and KSL.COM: PROTECTORS OF THE LDS CHURCH NAME

The Utah County Sheriff's Office conducted a "human trafficking operation" in Lehi on Valentine's Day. After posting a message on an undisclosed social media app, Moss — using the name "Pilot" — contacted what ended up being an undercover detective and arranged to pay $150 for "services such as kissing, touching and pleasure that Moss was looking for," according to a police affidavit.

"Moss then stated he was looking for girls to let him be their manager. He stated he has done this sort of thing in the past and he has a system that is 'cutting edge' and avoids people getting caught," according to the report.

What the article fails to report is that he was currently serving as an LDS BISHOP of the Mill Pond Ward in Lehi, Utah.

Bishop David Moss on Sunday February 10, 2019 conducted Sacrament Meeting as well as probably giving Temple Recommend Interviews. Four days later, he was busted for "exploiting a prostitute, patronizing a prostitute, two counts of lewdness and sexual battery."... The following week on February 17th, he was released from being the Bishop.

The KSL article hides the fact that he was a current serving Bishop. The headline says former Utah vice squad lieutenant arrested. Well it was years ago that he was in law enforcement  and only say at the end of the article that "Moss has also served as a leader of a local religious congregation."

Moss was a lieutenant over the St. George Police Department's vice squad, according to investigators, but was forced to resign from the department due to sexual misconduct allegations. He then moved to Lehi. Not sure how he was then called to be a Bishop of the ward.

So, Why hide the fact that he was a Bishop... I mean that is BIG NEWS! He is even still listed as the Bishop on the LDS Tools and Meetinghouse locator. See below of a screenshot as of today.

The headline should say,  LDS BISHOP IN LEHI ARRESTED IN PROSTITUTION STING. 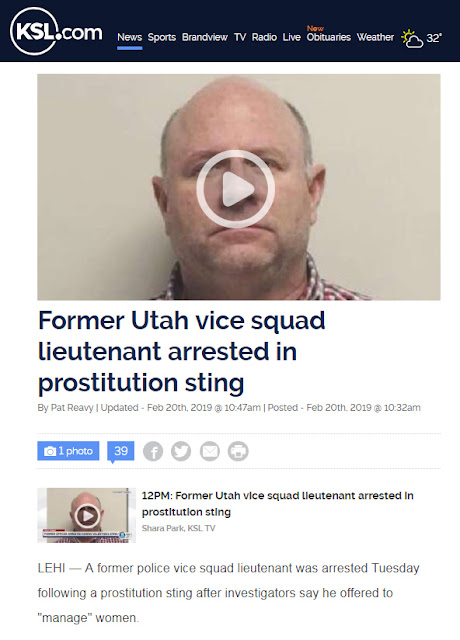 Makes you wonder how David Moss was called to be the Bishop: See article below on LDS.org

HOW A BISHOP IS CALLED

Posted by BARE RECORD OF TRUTH at 2:31 PM