The image on the right is by Simon Dewey.
(Most LDS artists tend to paint Jesus Christ as a very handsome, "GQ looking", with "Mitt Romney" hair/cheekbones) 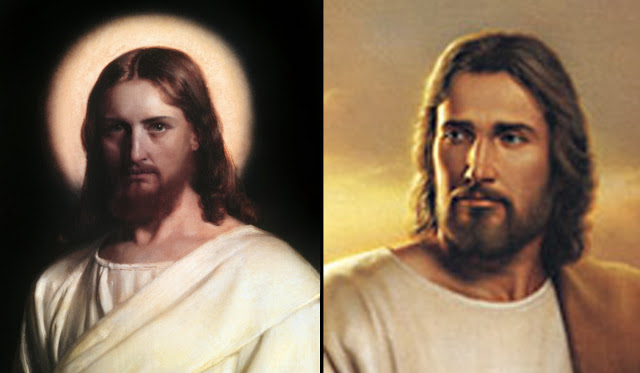 We live in a day when Satan deceiveth the whole earth. (Revelations 12:9). While many of us can discern between obvious truth and error, see the difference between black and white, or feel the difference between hot and cold… it is more difficult to discern between what is real and what appears to be real, to discern what is “authentic” and what is counterfeit. Unfortunately, many times the counterfeit version actually looks better, seems to it make us feel better and sounds better to our ears. These counterfeit look so real that "if it were possible, they shall deceive the very elect" (Matthew 24:24), all the while they believe they are following the real thing.


Authentic : the author or maker, Embodies the truthfulness of origins, attributions, commitments, sincerity, devotion, and intentions.

Counterfeit: an imitation or variation of the original. Assuming the appearance of something, made by another. Counterfeit products are often produced with the intent to take advantage of the superior value of the orginal.

We should always be careful not to be deceived. It is unfortunate when we honor, worship or follow things that are counterfeit, thinking it is the real thing. Here just a brief example. 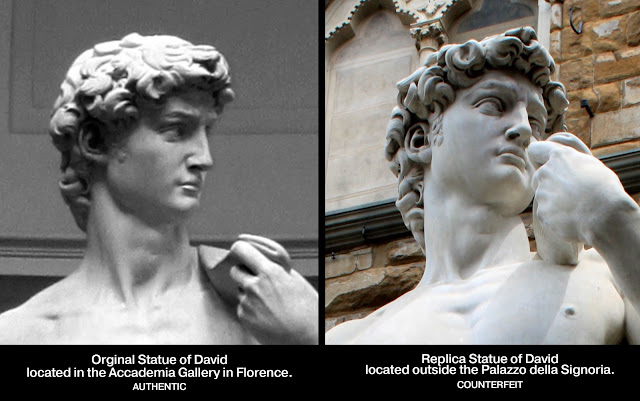 Michelangelo selected a used piece of marble. It was heavily scarred by previous sculptors who had given up on carving this particularly difficult stone. Skeptics doubted that anyone could produce anything worthwhile from this battered and overworked chunk of marble, but Michelangelo saw something within it that nobody else could see. Other sculptor created pieces of art from beautiful, unmarked and without outward flaws.

As Michelangelo’s Statue of David was being transported to the place of honor, the statue was stoned and attacked by unknown assailants. We also know in later political upheavals, the David was knocked of its perch and its right arm broken. Fortunately, another artist and supporter of Michelangelo salvaged the pieces and had the statue repaired when social order was restored. However, in 1873, it was decided that the David statue would be safer indoors, and a copy was set in its place.

It is very difficult to tell the difference between the two statues. (The photo on the right of the statue of David is the replica and to most, it actually looks better than the one on the right... because it is newer and without blemish or scars.


The reason for this is from the following comment on the mormon stories podcast;

http://mormonstories.org/?p=2471
"I've been surprised at appearances. I've avoided making any effort to provide a description of the Lord's appearance. In the early church there are passing references to the Lord's "round face" from which I can affirm they saw Him. Most of the LDS artwork depicting "Jesus" are pretty good likenesses of Lucifer. I think there is wisdom in not making an image of the Lord because most of the images are quite misleading."
.
Posted by BARE RECORD OF TRUTH at 8:58 AM 4 comments: