I can't imagine trying to run such a global church. It is quite a responsibility to reach out to all of these 15 million members, many of whom are in need of rescuing. It is particularly difficult when many of the members are struggling with so many problems. Some of these problems were addressed in the Conference talks, problems like depression, addiction, questioning faith, economic and financial difficulties.  Answers to these problems were also given. We are to repent if we are not paying our tithing, keep the commandments, doubt your doubts, and follow the counsel of our living prophet.  Some of you might have noticed that there was a new verse added to the hymn, "Keep the Commandments". Sung by the Mormon Tabernacle choir,  the new words are  "We are his children, and we must be tested to show that we are true, hold to his promises, heeding the prophets, keep the commandments, in this there is safety and peace."  link

In corresponding with a friend of mine, we talked briefly about our thoughts on General Conference. I agreed with what he said and I quote, "As I listened I thought, "a lot of what's being said here is good and wholesome.  So what is the problem?" After some thought I think I was able to pin it down. It's as though there's a train wreck coming and nobody is talking about it. That's the problem. Everything is good, lovely, and happy. Problems are occasionally acknowledged, but overall we are lulled into security. .... they are good men with good advice." 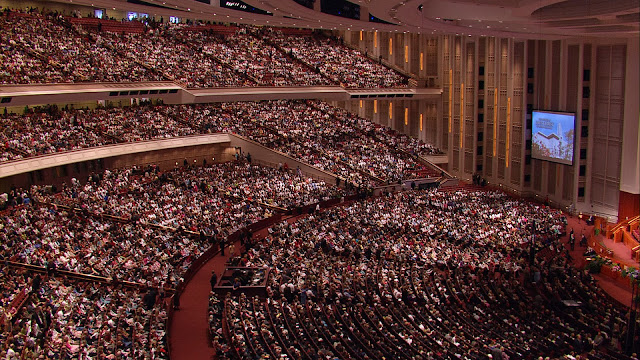 So what is the problem?, what is this train wreck?

In the Priesthood Session, Elder L. Tom Perry made an interesting statement in his talk on the importance of doctrine. Here is the quote:

"This doctrine is to the Church like a battery is to a cell phone. When you remove the battery from your cell phone, it becomes useless. A church in which true doctrine is no longer taught is similarly useless. It cannot guide us back to our Heavenly Father and our eternal home."

So if  I understand correctly what our apostle is saying is, True Doctrine is power. If true doctrine is no longer taught in a Church.. the Church is useless. Furthermore, the Church which does not teach true doctrine cannot guide us back to our Heavenly Father.

"False teachings come from Satan, the father of all lies. His desire is to pervert, change, and alter revealed truths. He wants to deceive us so some of us will lose our way along the journey back to our heavenly home."

So  again, if  I understand correctly, Satan desires that revealed truth gets changed and altered. He wants us to be deceived. In order for Satan's plan to work, he starts out with revealed truth.. not falsehood. He then changes and alters the revealed truth.

Further doctrine contained in the lectures describe how we can hope to inherit the same reward as the Ancients by following the same path as they did. It  teaches that we can't expect to achieve the same glory if we do not make a similar sacrifice as they did. It defines faith as a principle of power through action, in which you put your beliefs into action and thereby acquire power; because  faith is related  to having power. All of this doctrine is contained in the Lectures of Faith.

These lectures were prepared for the School of the Prophets and approved and edited by Joseph Smith. Their presence in the scriptures was the reason for the change in the title from Book of Commandments to Doctrine and Covenants. The "Doctrine" portion of the book was comprised of these lectures.

In the preface of this scripture it states: "The first part of the book will be found to contain a series of Lectures as delivered before a Theological class in this place, and in consequence of their embracing the important doctrine of salvation, we have arranged them into the following work." 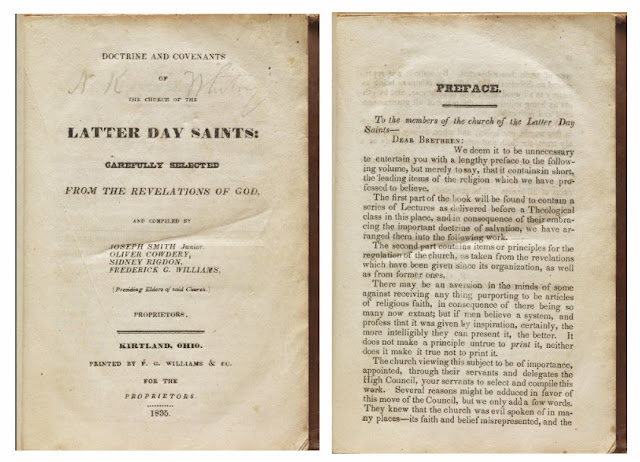 However, all of this Doctrine has been removed from our scriptures. The Lecture on Faith were subsequently removed from the Doctrine and Covenants in 1921, essentially leaving the just the "covenants" since the "doctrine" was removed.


Can we equate the removing of this doctrine from our scriptures like removing a battery from a cell phone? Has misapprehending the character and nature and attributes of God from that date until today, prevented us from acquiring faith? If so, then it's time for us to shake that off  and rise up and lay hold upon faith again.