258: NOW WHAT IS THIS OTHER COMFORTER?

While one might think that small changes are insignificant,  we know that over time these changes slowly add up to big changes. The Deuteronomists were a group of men who made changes to scriptures. They re-translated, edited, modified scripture from the Old Testament. In fact, there are 96 books missing due to their redaction. The Deuteronomists were the forerunners to the Pharisees. They put themselves in charge and interrupted scripture. They changed the ancient Hebrew religion. 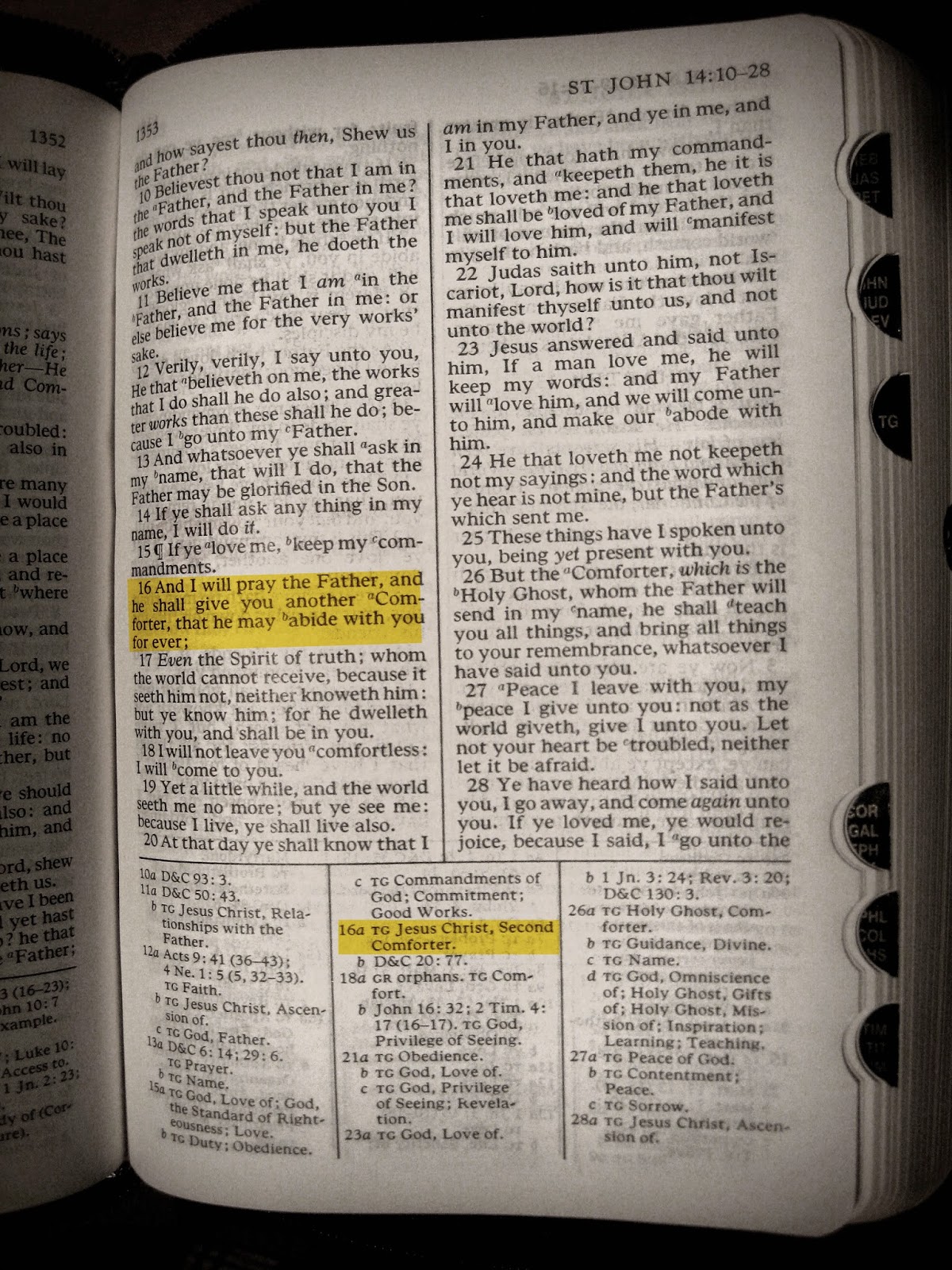 You decide for yourself. I think it is pretty clear who this other Comforter is. The following are quotes from Joseph Smith and from the Doctrine and Covenants.


"Now what is this other Comforter? It is no more nor less than the Lord Jesus Christ Himself; and this is the sum and substance of the whole matter; that when any man obtains this last Comforter, he will have the personage of Jesus Christ to attend him, or appear unto him from time to time, and even He will manifest the Father unto him, and they will take up their abode with him, and the visions of the heavens will be opened unto him, and the Lord will teach him face to face, and he may have a perfect knowledge of the mysteries of the Kingdom of God; and this is the state and place the ancient Saints arrived at when they had such glorious visions—Isaiah, Ezekiel, John upon the Isle of Patmos, St. Paul in the three heavens, and all the Saints who held communion with the general assembly and Church of the First Born." (Joseph Smith, History of The Church of Jesus Christ of Latter-day Saints, 7 Vols. 3:380-81)


"The other Comforter spoken of is a subject of great interest, and perhaps understood by few of this generation. After a person has faith in Christ, repents of his sins, and is baptized for the remission of his sins and receives the Holy Ghost, (by the laying on of hands), which is the first Comforter, then let him continue to humble himself before God, hungering and thirsting after righteousness, and living by every word of God, and the Lord will soon say unto him, Son, thou shalt be exalted. When the Lord has thoroughly proved him, and finds that the man is determined to serve Him at all hazards, then the man will find his calling and his election made sure, then it will be his privilege to receive the other Comforter, which the Lord hath promised the Saints, as is recorded in the testimony of St. John, in the 14th chapter, from the 12th to the 27th verses" (Teachings, pp. 149-50).


"I now send upon you another Comforter, even upon you my friends, that it may abide in your hearts, even the Holy Spirit of promise; which other Comforter is the same that I promised unto my disciples, as is recorded in the testimony of John. This Comforter is the promise which I give unto you of eternal life, even the glory of the celestial kingdom; which glory is that of the church of the Firstborn, even of God, the holiest of all, through Jesus Christ his Son" (D&C 88:3-5).

Hopefully this change to the footnote was a printing error mistake and they will fix it, and not a modification or alteration to doctrine.