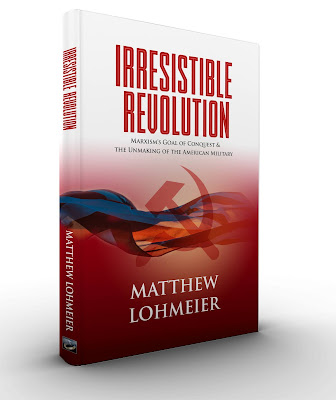 DISCONTINUATION OF ADMINISTERING THE SACRAMENT IN YOUR HOME

A friend of mine forwarded an email to me that he received from his Bishop this week. This official correspondence from his Stake Church Leaders stated that fathers no longer have permission to bless the sacrament in their own home. They must return to partake of the Sacrament in their ward building even as the mandate to still wear masks is still in force.

"In our priesthood leadership meeting yesterday, President [XXXXX ] noted that the blanket authorization allowing the sacrament to be administered in homes in our stake has been discontinued. If you are not yet comfortable returning to our sacrament services and would like the sacrament in your home, please reach out to the bishop."

"For all of our in-person sacrament services and classes, we ask that everyone continue wearing face coverings, as instructed by our Area Presidency."

It saddens me that the Church is no longer allowing  the ability for priesthood holders to bless the sacrament for their families in some stakes in Utah. As a father, I have the responsibility to minister to my wife and children and provide for their spiritual needs. Giving blessings such as Father's blessings, Priesthood Blessings of Comfort/Healings as well as blessing the Sacrament have been an important part of our own family's spiritual needs during this unprecedented time. We have preferred holding Home Church instead of being forced to wear masks to Church. Our neighbor told us that someone in our ward attended Church last week not wearing a mask. After the meeting started, the presiding Stake President asked that the official Church policy of wearing face masks to be read over the pulpit calling out the offender.

I am sure the Church has their reasons to gain back the control over who can bless the sacrament. Until our Stake Leaders no longer permit the sacrament to be blessed in homes, I have been grateful for opportunity.

I remember a friend telling me that it is usually a sign of fear that people exercise control over others. However, the more you attempt to control others, the likelihood of losing them is greater. For example, if you want to hold as much water in our hands as possible, the best thing to do is hold both hands open with as little grasping of the water as possible. The more one clenches to hold onto the water, the less water you will retain.

We would to well to remember what the Lord said in D&C 121 about how exercise the Priesthood. 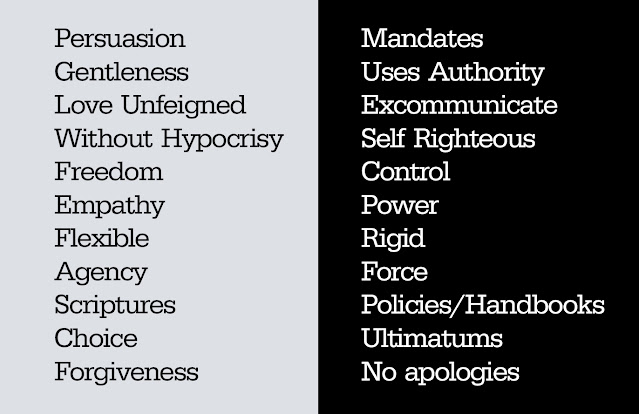 Sidenote: I read a footnote that other day of what the word 'dominion' means. We hear that word a lot in the scriptures and in the Temple. I have always connected the word to be mean.. 'to rule over or be dominate'. However, the below new insight I think is beautiful. Hopefully all of those men who think they have right of "dominion" will have a better understanding now of what that truly means.

"The word “dominion” and the word “domicile” come from the same root. A domicile is a place set in order, arranged, planted with a yard and garden, and everyone and everything having a place for occupancy. Something made beautiful and aesthetic by the effort (or husbandry) of the residents. That image of “husbandman over a domicile” was what God conferred on Adam when he was given dominion over the entire creation. So Adam (and his posterity) were charged to do something much different with this creation than what mankind has done. We rather brutalize it into submission. We are more vandals and raiders than husbandmen to the earth."
Posted by BARE RECORD OF TRUTH at 3:09 PM No comments:

The below YouTube video from the Church of Christ features small children singing a song entitled, 'Always Submit To The Church Administration'. This song was written by a self-proclaimed "one true Church" that was founded in the Philippines. Here are the lyrics to one of their catchy "Primary" songs.

Always submit to the Church Administration.
For they were placed by Lord God to lead his nation.
If we obey then we will receive salvation.
Sing along with me.

The 'Follow the Prophet' song is one of the first songs that the Church teaches children starting in Nursery to the two year olds. In fact to make the song more interactive for the toddlers,  Nursery leaders give one of the children a large photo of President Nelson to hold as he/she marches around the room as the rest of the nursery children follow behind. Each child would then take turns holding the Prophet's photo as the children march around the room following the photo of President Nelson.
I sure wish we would change the words of this chant song from Follow the Prophet to  "Follow the Savior." It would also be nice to have the children hold up a picture of Jesus instead of President Nelson.
Here is a recently released video of LDS children answering the question of why we need to follow President Nelson.  I think it is interesting that Jesus Christ's name is NOT mentioned once in this video.
https://www.youtube.com/watch?v=6BavQ7i-vh0
A few days ago I read an article about an interview with Justin Bieber who was asked about his faith in Christianity.  The Pop singer called out religious leaders who put themselves on a pedestal and cause the church to be surrounded by them instead of being focused on Christ as the center of the church. Bieber, an outspoken Christian, stated, "I think so many pastors put themselves on this pedestal. And it's basically, church can be surrounded around the man, the pastor, the guy, and it's like, 'This guy has this ultimate relationship with God that we all want but we can't get because we're not this guy.' That's not the reality, though. The reality is, every human being has the same access to God."
In addition to calling out pastors who put themselves on a pedestal, Bieber reminded fans that Christianity isn't a self-help religion, rather, it is about coming to God for help and letting Him lead and change you for His will.

Justin Bieber shared his experience and said, "I came to a place where I just was like, 'God, if you're real, I need you to help me, because I can't do this on my own. Like, I'm struggling so hard,"

I wanted to share an excerpt from a recent talk given last month about the Religion of our Fathers.

Joseph Smith taught the idea of direct association with Christ as the promised Second Comforter during a visit to Ramus, Illinois on April 2, 1843. After quoting Christ’s promise to not leave His followers comfortless because He and His Father would come to them and take up their abode with them, Joseph explained, “Now what is this other Comforter? It is no more nor less than the Lord Jesus Christ himself.... When any man obtains this last Comforter he will have the personage of Jesus Christ to attend him or appear unto him from time to time. The appearing of the Father and the Son, in that verse, is a personal appearance; and the idea that the Father and the Son dwell in a man’s heart is an old sectarian notion, and is false.” This appearing of the Father and Son began with Adam, and was intended to continue in every generation. Although the teaching of Christ as the Second Comforter was taught by Joseph, and believed by LDS Mormons, it is now one of the teachings that has dwindled from LDS teaching. In a Boise LDS meeting, church apostle Dallin Oaks denounced the teaching of mortals needing to see the Lord as a “tactic of the adversary.” Following that, the LDS church removed a footnote from their KJV John 14:16 which previously referred to Jesus Christ and replaced it with a reference to “the Holy Ghost.”

Posted by BARE RECORD OF TRUTH at 11:58 AM No comments: