Here are some thoughts about the upcoming days that I think are very important. (Please see below the calendar with some information on attending a Passover Meal with Avraham Gileadi in junction with the Isaiah Institute.)
Next week is the Spring Equinox. It is my opinion that this year is really an important year since many of the dates with Jewish and Christian traditions (the Passover/Crucifixion, the Full/New Moon, the Triumphal entry on Monday and Easter (Resurrection) and First Fruits on Sunday. I also think it is symbolic that Easter this year is on the April 8th. The number 8 which is a renewal, rebirth and new beginning.
Just a quick observation that came to mind when creating this calendar.  The Jewish calendar uses the new moon to set their Holy Days.  The new moon is not visible in the sky even though it is there. The Christians use the full moon to set the holy day of Easter. The Full moon is visible, fully present in the sky. I think the new and full moons are symbolic for the unseen Messiah for the Jews (new moon), and the seen and visible Messiah for the Christian (full moon). 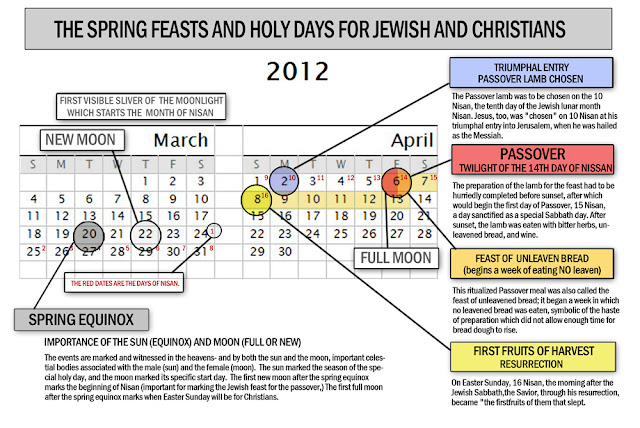 A great way to observe the Passover:
Everyone observes this time of year usually with family. Most probably have never even participated in a Passover meal. It you are interested, Avraham Gileadi in conjunction with the Isaiah Institute are putting together their sixth annual Passover dinner. It would be a great way to celebrate the  Easter weekend,  a season of renewal and to acknowledge our Savior as the Lamb of God. You can learn about the Jewish Passover and its rich symbolism from an LDS perspective and why it is meaningful today as a type of things to come.  It will be held Saturday, 7th April 2012, 6:30–8:30 p.m., For more information you can go here: http://josephandjudah.com/
……………………………………
Sidenote:  The following is written by my cousin and good friend John Pratt. It is an excerpt from an article he wrote in the 1985 July Ensign

The Passover feast centered on the paschal lamb, which was a sacrificial lamb, a male without blemish and with no broken bone, even after death. Likewise, Jesus was the "Passover," the "Lamb of God" , a male without blemish and with no broken bone, even after death (John 19:36).
The Passover lamb was to be chosen on the 10 Nisan, the tenth day of the Jewish lunar month Nisan. It was to be killed by "the whole assembly of the congregation of Israel" on 14 Nisan, which was usually the day of the first full moon of spring. Jewish sources state that the lamb was sacrificed between 3:00 and 5:00 P.M. on that day.[3]
Jesus, too, was "chosen" on 10 Nisan at his triumphal entry into Jerusalem, when he was hailed as the Messiah which had been prophesied by Zechariah. The multitude who had assembled in Jerusalem for Passover later consented to his death when they "all" cried out on 14 Nisan, "Let him be crucified.". The Lamb of God died about 3:00 P.M. on the day of preparation for Passover, 14 Nisan, just when the paschal lambs were also being slain.
Of course, at the triumphal entry the multitude did not understand that they were choosing the Lamb of God to sacrifice, but believed they were choosing a king whom they expected to liberate them from Roman rule. And at the Crucifixion they were unaware that they were sacrificing the Lamb of God, but believed they were slaying an imposter who could not even save his own life.
The preparation of the lamb for the feast had to be hurriedly completed before sunset, after which would begin the first day of Passover, 15 Nisan, a day sanctified as a special Sabbath day. After sunset, the lamb was eaten with bitter herbs, unleavened bread, and wine. This ritualized Passover meal was also called the feast of unleavened bread; it began a week in which no leavened bread was eaten, symbolic of the haste of preparation which did not allow enough time for bread dough to rise.
Likewise, the body of Jesus had to be hurriedly prepared for burial before the sunset would commence the Sabbath, which would be a "high day"  because it was not only Saturday, the weekly Sabbath, but also 15 Nisan, the first day of Passover. It was on 15 Nisan, after the slaying of the first-born, that Pharaoh declared liberty to the captive Israelites. After their long period of bondage in Egypt, it must have been a day of great rejoicing. One reason that 15 Nisan was sanctified as an annual feast day was to commemorate that day on which the Lord brought Israel out of bondage and released them from the chains of slavery.
Similarly, on 15 Nisan A.D. 33, the Passover feast day, the Savior declared liberty to the captives in the spirit prison after their long period of bondage.  Before the Savior arrived, they had been "assembled awaiting the advent of the Son of God into the spirit world, to declare their redemption from the bands of death." In fact, they were already "rejoicing in the hour of their deliverance from the chains of death." The fact that they were assembled, rejoicing in the hour of their deliverance, suggests that they expected his arrival on the Passover feast day, the day of liberation.
The law of Moses states that "on the morrow after the Sabbath" of Passover, the priest should wave before the Lord a sheaf of the firstfruits of the harvest. On Easter Sunday, 16 Nisan, the morning after the Jewish Sabbath, the Savior, through his resurrection, became "the firstfruits of them that slept."  Jesus had already taught that he was like a kernel of grain which must abide alone until it dies in the ground, whereupon it can bring forth much fruit. Lehi also explained that the Savior, "being the first that should rise . . . is the firstfruits unto God, inasmuch as he shall make intercession for all the children of men; and they that believe in him shall be saved."
Thus, the carefully prescribed elements of the Passover ceremony precisely foreshadowed both the events of the Atonement and the time each would occur. The annual sacrifice of the paschal lamb on 14 Nisan was not only in remembrance of the Israelites' having been saved by the blood of the lamb on the houses in Egypt. it was also anticipating the 14 Nisan when the great sacrifice of the Lamb of God would occur. The feast on 15 Nisan celebrated not only the liberation of the captives of Egypt; that day would also be the time of even more rejoicing when the Savior would declare liberation to the captives in the spirit prison. And the third day, 16 Nisan, was not only the time when the firstfruits of the harvest of barley were presented to the Lord, it was also the glorious day of the Resurrection­the firstfruits of the harvest of souls.
Posted by BARE RECORD OF TRUTH at 4:00 PM 2 comments: