NO PANNING
...
New signs are now being posted throughout Salt Lake City asking the community to not give money to those who extend their hand for help. The signs say in bold letters : PLEASE DON'T SUPPORT PANHANDLING.  The sign asks that you give to agencies instead.  The list of agencies are listed on the slchost.org website. Recently, the Utah State Legislature passed a bill cracking down on beggars making it illegal to ask for money in certain areas.
I am reminded of King Benjamin's sermon in Mosiah 4 which reads: "For behold, are we not all beggars? Do we not all depend upon the same Being, even God, for all the substance which we have, for both food and raiment, and for gold, and for silver, and for all the riches which we have of every kind?"

His sermon reminds us that we are forbidden from turning away the beggar. We are forbidden from judging them. We have but one duty toward them; that is to help them. Not through a third party agency but to help them one on one. What if the Good Samaritan decided not to help the man stripped of clothing, beaten, and left half dead along the road.. but told the man.. I can't help you because I already donated money to a local agency instead. 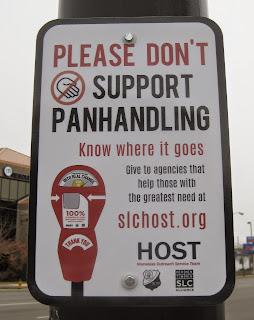 The hymn `Called to Serve' has become an anthem for members of the Church, especially for those serving missions.  It is  customary for the missionaries to stand and sing it at the Missionary Training Center as well as on their missions. The entire congregation even stood when it was sung at General Conference a couple of years ago. (See below video).

A friend of mine whose son is currently serving a mission shared the following withe me. The Elder reported back this past week to his family that in their zone conference, an Apostle and a General Authority were both in attendance.  When it was time for the closing song, all of the missionaries stood up to sing "Called to Serve". Everyone stood up except the Apostle and the General Authority. After the song was over, the Apostle got up and told the missionaries that we are not to stand when we sing the hymns. He continued to teach the missionaries that if they looked up on the stand and noticed that they were not standing, they should have known that they should not have stood up as well. It was one more example of how we are to look to our leaders and follow them in all what they do.

...
Clarification: The Apostle did not say that we are no longer to stand when we sing "Call to Serve" but just like the handbook states, that it should be the Presiding Priesthood Holder who should determine whether or not we stand as a congregation.
Posted by BARE RECORD OF TRUTH at 3:51 PM 10 comments:

Below is a compilation of 46 photographs taken over the past couple of years on my early morning hikes in the mountains. Most people don't find enjoyment in waking up at 4:00 AM in the morning.  (especially in the winter when you need to strapping on snow shoes in freezing weather and hiking up into the mountains.) For those who seldom see the beauty of the sunrise from on top of a mountain, here are some photos.

We read in the scriptures that "For of him unto whom much is given much is required."  We sing the hymn, "Because I have been given much, I too much give." For this reason, I wanted to post the video today.


There are three different pronunciations of the word AMEN. The most common way of pronouncing the word is "ay-men". The "A" is pronounce like you would say the Letter A. The word means to believe, to have faith, to trust, or to stand firm on what we have heard or seen. At the heart of the meaning is the idea of certainty, firmness, dependability, and trustworthiness.

The word "Amen" has been transliterated into most languages and has been called the best-known word in human speech, so that when we say “Amen” it confirms our belief in and affirmation of another’s person’s statement. In other words, we are acknowledging that "it is so."

But if you pronounce Amen as "ah-men" or Ahman it takes on a whole new meaning.

Ezekiel writes after the destruction of the Temple by King Josiah:

“And the light that came forth from the Child was shining so brightly that none could look upon him. In that hour that He was born, there was a voice of many beings proclaiming in unison, Ahman! Ahman! Ahman! And the light which was born was multiplied and it obscured the light of the sun itself by its shining rays. The cave was filled with bright light and with the most sweet smell. The Child was born just as dew descends from heaven to earth and His perfume was fragrant beyond all the smell of ointments. The Child's body was shining like the dew of the Most High God.”

It is important to note that the word “Ahman” was repeated three times.… Not the word "Amen." The voice of many beings proclaimed in unison the name of the Father, Ahman.


Those who live in Salt Lake City know that during the winter months we can experience what is called an inversion. An inversion is a reversal and deviation from the normal weather patterns and temperature. Instead of the normal cold air above and warm air below, the atmospheric conditions become inverted. The cold air gets trapped under a layer of warm air. This warm layer acts much like a lid trapping the cold air near the valley floor. This weather inversion causes fog and pollution to hover over the valley. What was normally warm is now cold, and what was cold is now warm. An inversion can lead to pollution, such as smog being trapped close to the ground, with possible adverse effects on health. Days go by without ever seeing the sun, only grey skies. Sometimes the light of the sun can penetrate through the grey clouds, but one needs to rise above the inversion to actually feel the warmth and see the sun.

Much like this weather inversion when warm is now cold, and cold is now warm, we also experience spiritual inversions. We read in the Book of Mormon in 2 Nephi 15:20 “ Wo unto them that call evil good, and good evil, that put darkness for light, and light for darkness, that put bitter for sweet, and sweet for bitter!” This inversion of good and evil causes a lot of “grey skies.”

All truth that come directly from God is Light. However, men quickly changes that into grey. Below is a simple chart showing how God's Truth quickly becomes grey when mingled with error.

Through our impatience, ambition, and deception we quickly loose the whiteness of God's Truth and Light. It is no longer authentic and exact but becomes increasingly false, dark, and counterfiet that will lead to chaos. If only we can learn to be more patient, less ambitious, discern better, and move forward with exactness. We have a tendency to mingle truth with error through our zeal and ignorance. We grow tired of waiting upon the Lord, and move forward in our vanity that we are doing the Lord's bidding. Zion will not consist of those who have ambition and zeal, but are patient and seek for further light and truth, and can discern that which is "grey".
.
Posted by BARE RECORD OF TRUTH at 3:04 PM 9 comments:


While most of the world was sleeping in their warm beds after a long night of celebrating on New Year’s Eve, a group of us hiked up into the mountains to see the first Sunrise of the New Year. While our Western culture focuses on the parties and celebrations on New Year's Eve; in Eastern culture, the people wake before dawn on the first day of New Year and climb to a higher elevation to observe the first sunrise of the New Year. The first light of the new year is called Hatsuhinode. It is time for renewal, rebirth, and recommitment for the coming year.

Below are some photos:

The custom of raised hands during worship can be traced to the early years of Israel. The book of Psalms speaks of raised hands: "Because thy lovingkindness is better than life, my lips shall praise thee. Thus will I bless thee while I live: I will lift up my hands in thy name." (Psalms 63.3-4).
﻿
Raised hands are symbolic of our dependence on someone else. Raising hands during worship can be similar to children who lift their hands to be picked up, comforted, protected, or carried. It also in modern times signify the act of surrendering to show we do not have a weapon in our hands. Thus, raised hands in worship may suggest a reaching out for God's presence, blessing, comfort, or strength as well  as our surrendering to Him.

Another significant meaning of raised hands is to bless God, much like Aaron's blessing of the people. In Psalm 63 the psalmist says he raises his hands to bless God. This symbolizes both gratefulness and joy for the blessings God has given. Indeed, many of the psalms indicate that hands are raised in song and prayer to show thankfulness and joy for God's great works. The raising of hands for this purpose is common during songs of praise.

Also, the lifting of a hand signifies a vow. This is similar to our custom of raising our hand in court and promising to tell the "truth, the whole truth, and nothing but the truth." This particular gesture can also be used when one wanting to make a solemn covenant with God.

Here is the 2015 First Presidency Message for January. Posted without commentary.