"An extremely important lesson [is] driven home repeatedly in the Book of Mormon,  that righteousness does not consist of being identified with this or that nation, party, church, or group.  When you find a particularly wicked society in the story, look back a few pages and you will probably find that not many years before those same people were counted righteous. Or, when you find a particular godless and ferocious lot of Lamanites, if you look a few pages ahead you may find them among the most blessed and favored of God's people." Hugh Nibley, The Prophetic Book of Mormon (1989), 337

Marketing is the process of communicating the value of a product or service to customers, for the purpose of selling the product or service. It is a critical business function for attracting customers. To better understand the "customers", surveys and focus testing are conducted as well as market segmentation analysis are performed. Personas are created, and vast amount of money is spent on advertising.

In the NEW YORK TIMES, it was reported that the Church hired two big-name advertising agencies Ogilvy & Mather and Hall & Partners, to find out what Americans think of the Church of Jesus Christ of Latter-day Saints using focus groups and surveys.

The Church has been spending a vast amount of time, money, and resources around the world to "market" The Church of Jesus Christ of Latter-day Saints.. or affectionately called, the Mormons, including the creation of "personas". One of the goals of this particular marketing campaigns is to portray the members of the Church as normal, everyday people who are happy, successful and all have beautiful smiles. 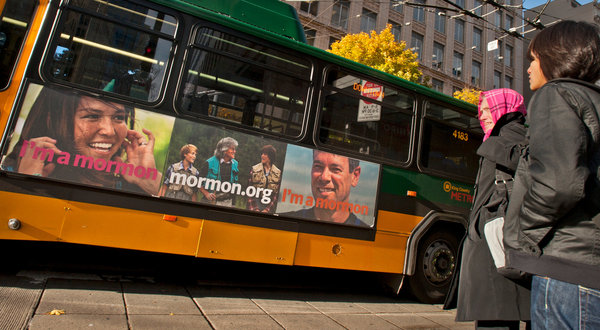 Here is a news report of this marketing campaign happening in London, England. LINK TO VIDEO


The main purposes of marketing is to influence someone's decision. The best way to do this is through their emotions. My wife coined the term POPE.... (Playing On People's Emotions). Beautiful ads and videos are created which affect our thoughts and hopefully our actions.

Most are aware of billboards, television commercials, radios ads, and print advertising to influence others, but most are not aware that  "personas"  that are also used in marketing. Personas are fictional characters created with the purpose to generate positive comments and start a buzz about the product. These comments will give the real people impressions that this is something of value. However, it is an artificial means to create hype. It appears real, and a way to influence the public. It creates buzz as if it were spontaneous. Even though it makes the product look hot, hip... it is fake and phony. It dismisses bona fide real people. It manipulates by influencing the impressions/comments written by real people

The Church can use personas to generate reactions to new stories and other things to influence real people by the contrived comments/"reactions" of the personas.  For example, if you put up an announcement that for instance about the dedication of City Creek mall in the Deseret news, or for the continuing support of the Boy Scouts, and you have personas generating comments who made sure that the first comments are positive.. (those are the personas).. These comments by "personas" help influence others to what would otherwise be a negative responses.

I have always been somewhat leery of Facebook. I prefer that my children do not have a Facebook Account. Now that President Monson, as well as the other apostles have Facebook's accounts, it will be hard to discourage them from having an account.. I can just heard it now, "But Dad, our prophet has a Facebook account"


"First Presidency members of The Church of Jesus Christ of Latter-day Saints recently launched their own Google+ pages. President Thomas S Monson, President Henry B. Eyring and President Dieter F. Uchtdorf will soon have their own Facebook accounts."

In the World Wide Training Meeting held on Sunday, it looks like all the missionaries will now be able to have Facebook accounts as well.

“As missionaries enter this new age where they will use computers in the work of the Lord, we invite the young and the old, the adults, the young adults, the youth, and the children everywhere to join with us in this exciting new work by becoming Facebook friends with the missionaries in your area on your own computers and sharing their gospel messages online and by becoming involved in missionary work yourselves,” Elder Perry said.