"Behold, it came to pass that I, Enos,
knowing my father that he was a just man—
for he taught me in his language,
and also in the nurture and admonition of the Lord
—and blessed be the name of my God for it–"
In contrast, Enos in his first verse of his book, he describes his life as having been raised in “the nurture and admonition of the Lord.”  A quote from the book, Beloved Enos points out that "Nephi draws attention to “afflictions” first, then to having been “highly favored.” In contrast, Enos draws attention first to “nurture,” and second to “admonition.” Nephi could see the overriding hand of Providence in the afflictions he endured. He acknowledges God’s hand in all that he suffered. He was the better for having passed through his life’s ordeals. God’s hand in Enos’ life was more gentle. He needed admonition, as we all do. However, he was perhaps a more willing student, or a more optimistic personality than Nephi. Whatever accounts for this difference, Nephi’s formula includes “afflictions” first, and God’s “favor” second, while Enos follows the formula but adopts “nurture” first, and only secondly “admonition.” So, in the very beginning verse we find a contrast between Enos and the first writer in the Book of Mormon."
We all learn differently. The Lord is our Master Teacher and knows  us personally. He will teach us differently and knows whether we learn better through afflictions or less "painful" tutorials.
Both Nephi and Enos spent a considerable amount of time in solitude whether in the mountains and/or  in the forests to pray, connect with heaven and commune with the Lord. (I often wonder if Uncle Nephi took his nephew Enos on a few hikes.) We can read in the scriptures that Nephi would hike very early in the morning. The Lord was his alarm clock. The voice of the Lord would come and say.. Get up Nephi.. Arise... and go hiking up into the mountain. We know that Nephi was obedient and would "go and do" as commanded and he arose and cried (pouring out his soul in prayer) unto the Lord. we read:

and a few chapters later:

"And it came to pass that I, Nephi, did go forth up into the top of the mountain, according to the directions which were given... "
Yesterday I took a few photos of the Mt. Olympus mountains just east of my home. It has been rare this winter to be able to see the mountains from the valley due to the pollution and the inversion that settles in Salt Lake. In my opinion, the snow covered mountains peaks are majestic. The signs of our Creator are visible everywhere in Nature. 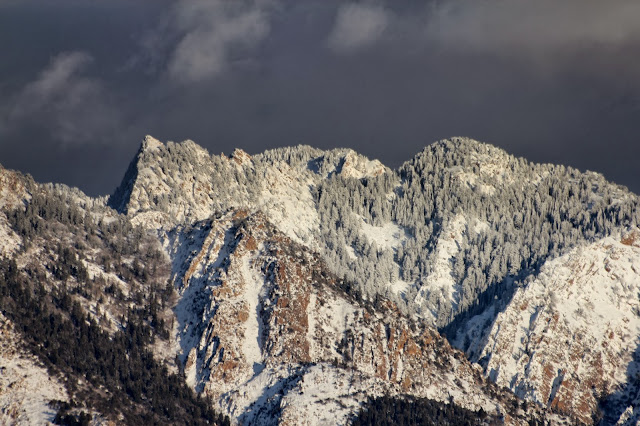