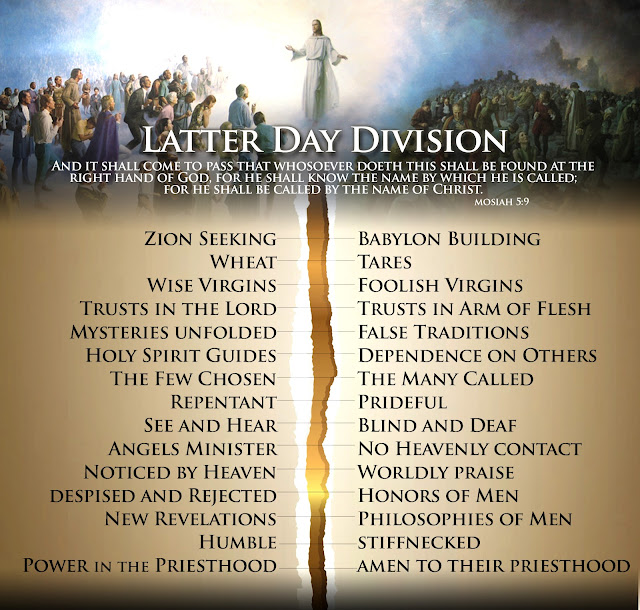 Posted by BARE RECORD OF TRUTH at 3:23 PM

Yeah, but how many of us who think we're on the left side of the chart get so prideful of that "fact" that we actually end up on the right side?

Thank you so much Brother. We need to have these in prints so that we can hang them in our homes or as book markers for our scriptures.

Monogamy --- polygamy
(For Joseph Smith never preached or practiced polygamy, BY wanted & started it & came up with D&C 132 long after Joseph's death)

Thinking you are on the right path based on cultural norms, and following the masses and correlated culture is so very different from actually having heavens approval based on revealed truth and scriptural standards.

There are those who have actually gained a knowledge of heavens approval, so I see hope for those interested in repenting.

Anonymous. God never condemned anyone for practicing polygamy. The only exception is David and Bathsheba. But he committed adultery and then essentially murdered her husband.

I don't care if Joseph Smith practiced polygamy or not. Let's stop this monogamy/polygamy dichotomy. Both are acceptable to God!

Of course Joseph practiced polygamy! And polyandry, too, taking wives that still belonged to other men. Are you just telling yourself what you want to hear?

thank you; this is well done.

If the person who posted this thinks they are on the left side, the mere fact that they would post this demonstrates pridefulness and contempt for others and thus contradicts their thinking. We are all on a journey to truth. Some may understand things that others do not, but we must love all, and we must love them for where THEY are, not for where we think WE are.

Thanks for the comment and your warning to not have pride and contempt for others. That was not the intention of the post. Yes I agree with you...we are all on a journey of faith.