36: Dignitaries at the Red Ribbon Ceremony for CITY CREEK CENTER

President Monson followed by Eyring and Uchtdorf to the Red Ribbon Ceremony
on March 22, 2012
(the beginning day of the Nisan on the Jewish Calendar which starts this evening) 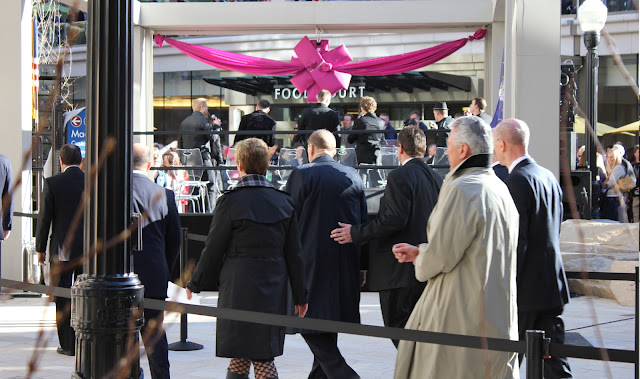 All of the Key Political, Economic, Religious and Financial Leaders.
All necessary elements for "success" in the world. 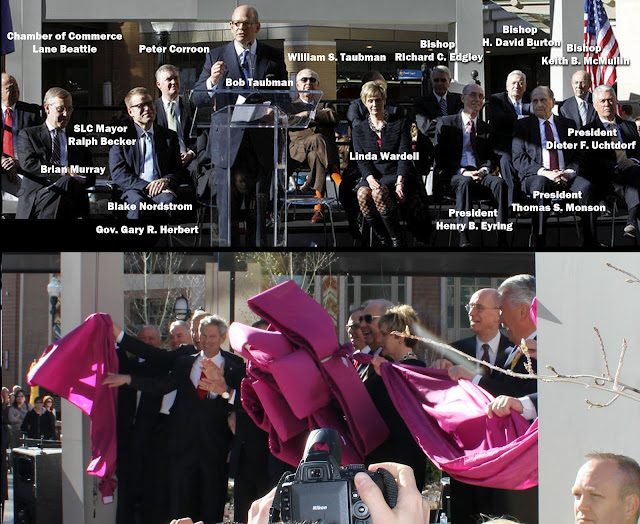 As the clock approached 10 a.m., after all of the speakers, including President Eyring, ended the dedication ceremony, the time had come to pull the ceremonial ribbon.
On the count of "one, two, three," all of the dignitaries shouted in praise
"Let's go shopping!"
At long last, City Creek Center was officially a reality.
I will write more shortly
Posted by BARE RECORD OF TRUTH at 4:50 PM

How about instead of telling people to 'go shopping' to adorn themselves in 'fine twined linens', we teach people to support the endless widows & the fatherless all around us who are being ignored by the Church.

Thank you for all the pictures and your thoughts!

Was Elder Eyring really part of the dedication ceremony?? Like one of the speakers?

"Go shopping"? Just as Pres Bush said in defiance of Gods call to repentance on 9/11. The Church has now joined the Leaders of Babylon, yet our fate will be more swift, as the D&C says "it shall begin in my House".

I would be buying some Earthquake insurance soon. How long the Lord will allow this to be in his Holy place is unsure, Yet it is sure we have joined with Mammon.

This is a very interesting way to celebrate the beginning day of the Nisan. I don't think this was an accident in timing.

"And I God will not be mocked!"

Yes.. He was the first speaker

Dare I ask what he said?

The LDS in deed made the deal with the Lord in their own temples, build Zion to bring in the millenium or build babylon and bring upon us the judgments of God.

I am profoundly sad. I have worked hard not to put my trust 'in the arm of flesh'. I don't depend upon these men for my faith to be renewed, though I am an 'active' member of the church. But I have respected these men, at the very least. And now I really feel full of sorrow.

I want to lament. Something feels wrong about this. This isn't why my ancestors who were peaceable (not aggressive towards non-Mormons) were killed in Missouri and Illinois.

Something is terribly wrong here. These men may still be good men, but this doesn't feel like "Zion". I really am comforted, knowing that ancient prophets knew that things would get really 'tangled' in the last days. But it still isn't easy to watch it happen.