Revelation: Truth given to man by a divine God. It is progressive.
Reactionary: An opinion or action given in response to a situation or another man actions. It is regressive.
.
We sometimes use the term ‘revelation’ with the word receiving ‘prophesy’. The verb "prophesy" means "to speak before" (from Greek pro, before, and phemi, to speak). The spirit of prophesy is also meant in having the testimony of Christ. This gift includes both the idea of foretelling and forthtelling, predicting the future and preaching truth. A prophet is God's mouthpiece, he speaks for God and gives His message. Sometimes this message is regarding the future...other times it concerns the present, even the past, or simply doctrinal truth, but it was always God's message spoken forth.
.
Right now the Church seems to be stuck between a rock and a hard place on how to deal with new light being shed on past “reactionary” church statements that were taught as “revelation”. I recently became aware of two Religion teachers, one a BYU professor and the other a CES seminary principle who have made public statements and/or interviews regarding our past church history which does not mesh with Church Correlation.
.
It is my feeling that we are approaching some very interesting times ahead of us.. as a country and as a church. I am currently taking a microbiology class. In that class, I have received insight from studying the smallest of things. We have been learning about the life cycle of living cells, bacteria and viruses. I made the below chart of the Four Phases of Cell Growth for Bacteria. 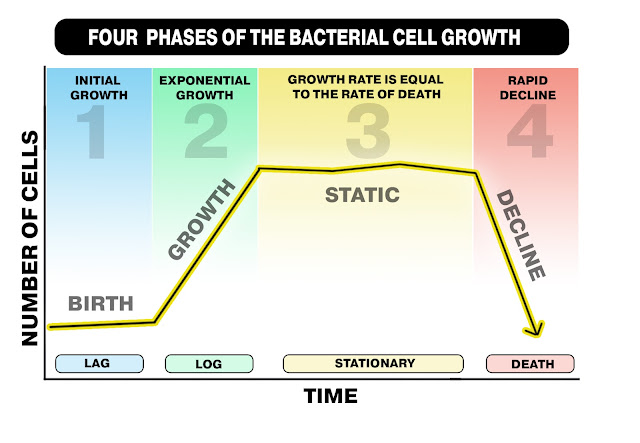 I see the similarities to what has happened in our country and the church as an institution. The Church, according to their stats, is growing at a much slower pace today than it has over the last 30 years. The indicators include much slower membership growth, a decline in conversions, a decline in conversions for each missionary, and a lack of retention. Many are leaving the church. Just like the four phases of cells growth, once there is lack of nutrition and a build of toxicity, cells diminish, and die off. The key is to find the nutrition from an never ending source and avoid the toxic waste material in order to continue to live in an uninhabitable environment.
Posted by BARE RECORD OF TRUTH at 11:34 AM

Interesting thoughts on the reasons for the decline: Lack of nutrition and toxicity. We surely do not have the word of the Lord and the spiritual experiences of earlier days. And I have to think that such a lack of faith is injurious to us as individuals and as a people.

Response back from an email:
I like the thought about prophecy meaning "to speak before." Prophecy speaks before it receives the evidence or "sign" that eventually accompanies it, and reactionary "prophecy" speaks after it has seen certain cultural ebbs and flows and "signs." Makes me wonder if this type of reactionary "prophecy" is related to sign-seeking. (ie. making faith promoting statements based on validating statistics that make us feel good about ourselves). It runs contrary to what is taught in 1 Nephi 20. If we just base all our teachings on results we can easily fall into the trap of saying that our concept of "God" or, to put it in scriptural terms, "our idol," "hath done it."

Who is the CES instructor mentioned in the post?

Everyone today, except a few, even in the Church, has been deceived to support or do evil.

The 'latter day apostasy' foretold by ancient prophets (2 Nephi 28), has happened, & it started back in Joseph's day & has only become worse.