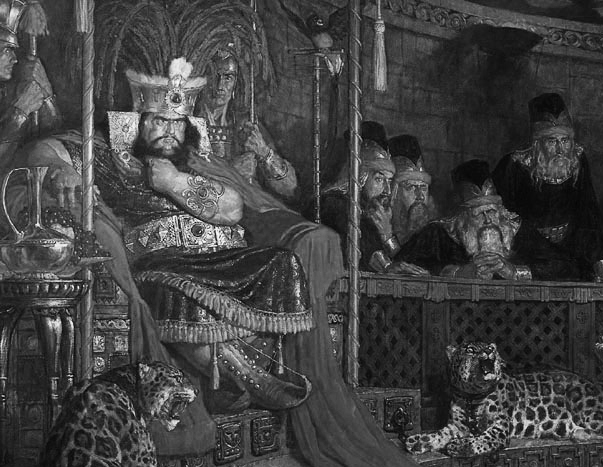 King Noah and His Kingdom, Part 4
(Conclusion to this chapter)

“For he put down all the priests that had been consecrated by his father, and consecrated new ones in their stead, such as were lifted up in the pride of their hearts.

“Yea, and thus they were supported in their laziness, and in their idolatry, and in their whoredoms, by the taxes which king Noah had put upon his people; thus did the people labor exceedingly to support iniquity.

“Yea, and they also because idolatrous, because they were deceived by the vain and flattering words of the king and priests; for they did speak flattering things unto them”
(Mosiah 11:5-7).

Noah called and ordained priests to replace those priests who had been ordained by his righteous father, Zeniff. You see, Noah had priesthood; at least he thought he did. We would say he “held priesthood.” These new priests were lifted up in pride, were lazy, practiced idolatry, and indulged in the same whoredoms as Noah. They were men after his heart. Alma, about whom we read later in the story, was among them.

The leaders of the people quickly became victims of inappropriate adoration (though they themselves victimized the people), and whether or not it was something they sought after, it appears that they became quite comfortable in their positions of high status and even fed on the envious and adoring lay mass. This happens swiftly when the king decides to let incessant, man-worship go unchecked. Only a meek man can combat the temptation of the praise of men, especially those who fancy the idea of claiming a following. The leader then takes delight in that attention, and indulges in priestcraft (2 Ne. 26:29).

King Noah set himself up as a light to the people, instead of pointing to Christ who is the only true light. He and his priests had their own distinct seats that were “above all the other seats.” They built a comfortable breastwork from which they could speak lying and vain words to their people (Mosiah 11:11).

What kind of a message is chocked full of lies and vanity that a body of religious people is willing to accept? There is only one – the people love to hear that they are good, and that all is well. “Yea, Zion prospereth. All is well.”

Something that we ought to ask ourselves and wonder about is this: Was Noah “worthy” to consecrate new priests? At what point does somebody’s character or behavior disqualify them from ordaining others to the priesthood? We’ve already established that Noah was unable to please heaven. He had already forfeited the “rights of the priesthood” (D&C 121:36). But does a man from whom “the heavens withdraw” and who has “grieved the Spirit of the Lord” have authority to pass priesthood to others? If yes, then what about the children of those “others?” Can it be passed, as would a family heirloom, from one generation to the next by men who take no delight in “persuasion,” “longsuffering,” or “gentleness and meekness?” Who have not charity and whose thoughts are filled with many things beside that which is virtuous (ibid, v. 41)? At what point does this break down?

Sadly, this class of priests was supported in their persistent idolatry, laziness, and whoredoms by the money of the people of the kingdom. And thus, the lay population supported these leaders in their iniquity, so much that they too became idolatrous. This has been Satan’s plan from the beginning – he buys things with money. His disciples believe they can have anything in this world for it. They really believe it!

The root cause of this shift is pride, but also trusting in the arm of flesh. The gradual descent downhill was so insidious that nobody from top to bottom was able to clearly perceive their own wretched state.

Noah’s subjects are a great reminder to us of how quickly we tend to forget the messages of the prophets. Because they forgot, they thrived on vain and flattering words that were given to them by their new leaders. Though the scriptures taught that flattery was of the devil, they nevertheless loved to be praised in their present course, and trod down the path of iniquity, and idolatry.

“If you only need to listen to the voices of praise, and adulation which speak to you that "all is well in Zion" then you can never recognize an authentic call from the Lord to repent. Instead, like Laman and Lemuel, you will erroneously think any message that condemns your misbehavior is "sharp" or "angry" (2 Nephi 1: 26). Yet Nephi's only intention was to seek "the eternal welfare" of Laman and Lemuel. (2 Nephi 1: 25)

“When we will only listen to vanity and praise, we are not much different than those who only wanted "smooth things" anciently. (Isa. 30: 10)

“The cure for some illness requires a knife to be used first before healing can begin. The purpose is not to injure, but only to heal” (Denver Snuffer).

The people became idolatrous. They were placing their trust in the arm of flesh, and therefore put men between them and God. This is a status wholly unacceptable to the Lord. Those who trust in men are damned (D&C 76:98-101).

Next we will look at the message that God had for Noah and his kingdom. God sent them a message of repentance by the mouth of Abinadi, his messenger. Hearing Abinadi’s word was the same as hearing God’s own word, for “it is the same” (D&C 1:38). He was a servant who came in the name of the Lord to declare repentance. He preached to Noah and his people during the time of Pentecost. Tonight begins Pentecost, over 2160 years later.
Posted by BARE RECORD OF TRUTH at 9:19 AM

It looks like my comments in two other posts in this series would have best fit here.

There is much we can learn from the scriptures if we liken them to ourselves, even if it hurts our pride and our idolatry. The pain of waking up now is preferable to the pain of the end when we have no way to escape the harshness waking up, nor the punishment we have chosen.

It is my understanding that the wickedness of the priesthood holder does not negate ordinances he performs. I know this sounds contrary... but if the alternative view were true, no one would have any legitimate ordinances done... because someone, somewhere along your 100+ year line of authority, some priesthood holder sinned. Many sins are never known by others.

Now EXERCISING priesthood authority and power is another story... THAT, in my view, can only come through faithfulness and strict conditions.

But having it conferred upon us... I think the Lord allows that to go on.