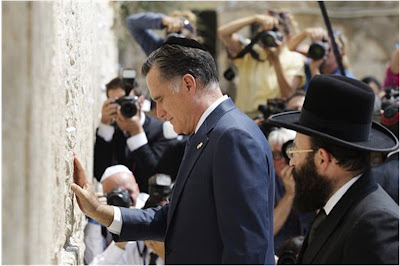 Posted by BARE RECORD OF TRUTH at 4:38 PM

a fascinating parallel; not sure what to think--

I don't disapprove of dancing, especially, not generally, but the conference center doesn't seem like 'the place' for it--

So, you (unknown) think this is a positive photo of "one of the most famous Mormons"?

I found it repugnant, but I don't want to offend anyone who thought otherwise.

it is very weird....how much deference that place is given, it was just rather incongruent...at best....as for "the most famous mormon"....sigh.....it will be a tragedy on many levels if he is elected. And I am not even talking about on a political level.

I don't see a Mormon President as a tragedy. The Church will get more inquiries into religion and the BOM than it ever has. The corp. with all its millions being pumped into advertising could never match this exposure.

It's time the Church was brought out of obscurity, warts and all. The truth can handle scrutiny. The rest should've been cast away long ago anyways.

I don't think 'unknown' wants this blog to become political--

and that doesn't appear to be happening anytime soon--

but I also don't want to start an argument--

and I am not a collectivist. The idea that any/all Mormons are the same as every other Mormon is not in my mind.

Each Mormon is an individual and is an individual representation of what he/she truly believes. According to what I understand about the life of the man above I would say that he believes in himself and in money.

The symbolism and irony identified in this post are deep. I never would have noticed that. Good work.

So, you (unknown) think this is a positive photo of "one of the most famous Mormons"?


Personally, I was surprised by the photo. When I went to the wailing wall, no cameras were permitted. I thought it was disrespectful to the Orthodox Jews, since they believe when taking photographs will take their soul away.

The photo seemed more like a photo opportunity to show which side his on. But maybe true to form, we might see next photos of Mitt Romney praying in a Muslim Mosque. :)

And yes... I would prefer to keep this blog non-political. :)

When Babylon collectively elects by popular vote to elevate as their leader/figurehead a representative of "Zion," well, one of the two teams must've swayed a bit in their supposedly eternal and diametric opposition, all justification and rationalization of what good could be done aside.

I'm not Jewish and I think what's going on in that picture is offensive, so it makes me wonder how much worse it is for those who are Jewish.