Same-sex couples are labeled as “apostates” and are subject for church discipline and their children will be prevented from being baptized until they turn 18. 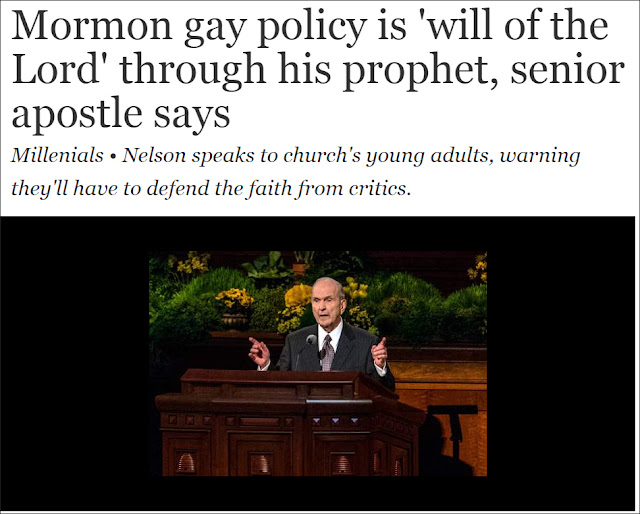 "These policy changes come after an extended period of counseling with our brethren in the Quorum of the Twelve Apostles and after fervent, united prayer to understand the will of the Lord on these matters".

"Each of us during that sacred moment felt a spiritual confirmation," Nelson, next in line for the Mormon presidency, told the faith's young adults in the first official explanation of the hotly debated policy's origins. "It was our privilege as apostles to sustain what had been revealed to President Monson."

Nelson explained that revelation from the Lord to his servants is a sacred process.

"The [three-member] First Presidency and Quorum of the Twelve Apostles counsel together and share all the Lord has directed us to understand and to feel, individually and collectively," he said. "And then, we watch the Lord move upon the president of the church to proclaim the Lord's will."


Same-sex couples are no longer labeled “apostates” and will not be grounds for church discipline and their children can now be baptized.

Link to the article:

A question: For any of those members who were excommunicated because of a same gender marriage- will the church now reach out to them and offer to reinstate their blessings and bring them back into the fold?

Or what about those youth who may have committed suicide in despair over this policy? Will they be offered a second chance at life here?

"That we be no more children tossed to and fro and carried about with every wind of doctrine by the sleight of men and cunning craftiness whereby they lie in wait to deceive." Ephesians 4:14

“to and fro” | ADVERB | In a constant movement backward and forward or from side to side.
“toss” | VERB | To throw (something) somewhere lightly, easily, or casually.
Posted by BARE RECORD OF TRUTH at 10:15 AM