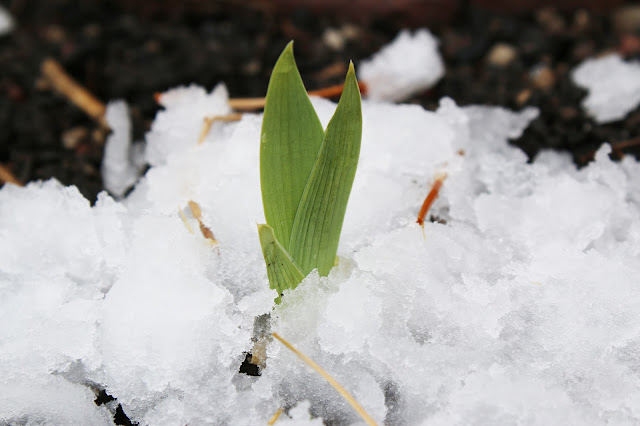 Today is the Spring Equinox. I wanted to wake up early and go hiking up in the mountains, but due to the snowy weather, I observed it in my own backyard and took this photo and then went back to bed. I haven't been a huge fan of daylight savings time this year. (or really ever).  The photo from our garden shows  both the winter and spring seasons come together into one image. It is symbolic of  the promise of new life of spring emerging out of the dead cold snow of winter.
I received an email this morning from a friend that said, "Happy Equinox! The Lord's true birthday! and attached a short paper that included this additional information:

In the Encyclopedia of Mormonism under the entry of 'April 6' it states that Christ was probably born in the spring at the time of the spring equinox. There seems to be more evidence to point to that, including evidence from early Christians like Origen. Origen lived around 250 A.D. and he certainly, among others, says that Christ was born on the spring equinox, which would've been a little bit different dating back then than it would be in our time. While others may disagree, one thing is for certain about the Spring Equinox. The Northern Hemisphere has the increase of light after the period of darkness, which symbolizes the triumph of light over darkness. This goes back as far as 6000 to 7000 B.C. where the ancient Egyptians celebrated the "Festival of the Triumph of Horus over Set." .

I am looking forward to the beginning of the spring season.
Sidenote:
It was two years ago from today that the first of seven videos in a three part series was released entitled The Heavens Are Open Again. Below is the compilation of all seven videos into one.
Posted by BARE RECORD OF TRUTH at 3:57 PM