EXCESSIVE and DISPORPORTIONATE NUMBER OF TEMPLES WITHIN 100 MILES?

If anyone has driven down the 1-15 corridor in Utah, you will see more and more additional Temples being built right off the freeway. We could almost call them "McTemples", since they seem to be built right off the freeway exits next to the McDonalds, and other fast food chains. The distance from Logan to Payson is about 100 miles as the crow flies. There are 21 Temples within that distance. If you spread the Temples evenly along that line, that would put a temple roughly every 4.7 miles. That is alot of Temples. Is that excessive? disproportionate compared to other areas?
We had the Temple President of the Jordan River Temple speak to our Stake a few weeks ago. It was interesting to hear him say that they have been having a hard time staffing the Jordan River Temple and he doesn't know how they are going to staff the Taylorsville Temple that not too far away. Not only is finding enough Temple Workers a problem (even with the Salt Lake Temple closed) but sometimes there is not enough patrons to do the Temple work. A Temple worker in our ward says that she has shown up for her shift only to be sent home because there are not enough patrons coming to the Temple. So my question is why are we building more? 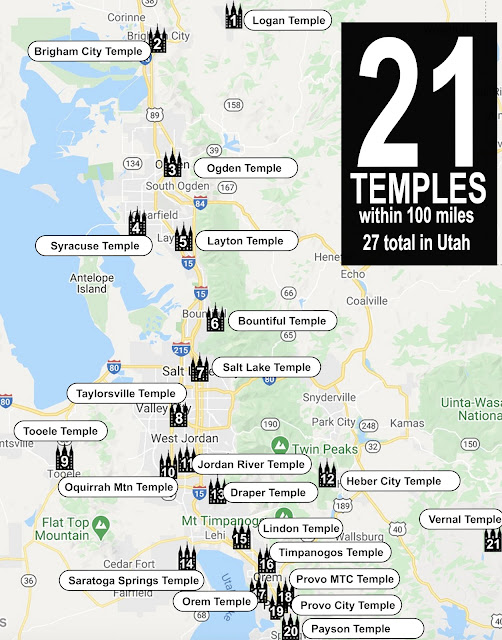 Here are some photos I took of the Provo and Taylorsville Temples that are currently under construction right off the freeway. 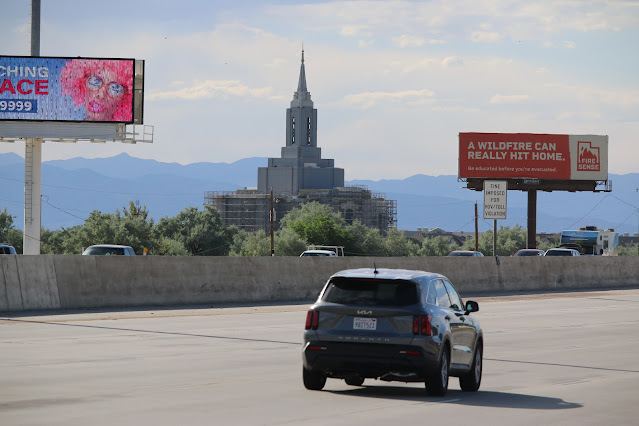 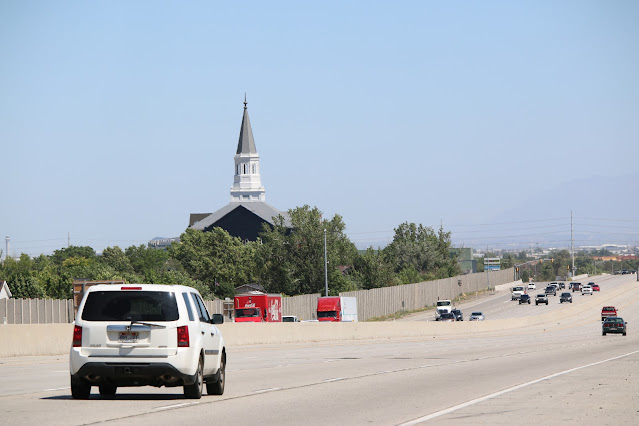 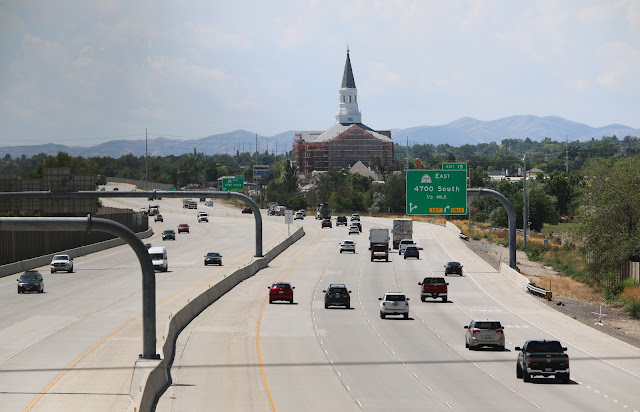 That being said, if you were to ask an active LDS member about all the Temples Utah, their likely response would be that the Lord is hastening his work, or that these temples are important to usher in the Millennium. However, the scriptures only indicate that there really is only two prophesied Temples  and I repeat TWO temples, that are actually suppose to be built before the Lord comes. One in New Jerusalem and the other in Old Jerusalem. Yet we continue to announce and build more and more.
Personally I think we have saturated the Salt Lake area with too many temples and watered down what a Temple should be.
Here are a few quotes about what a Temple should be:

“Joseph Smith constructed in a ceremony, in a ritual form, the idea of beginning a walk back in which you encountered sentinels along the way, and you demonstrated by the life you have lived that you are in possession of certain standards of conduct, so that eventually you could arrive at the point where you were able to converse with the Lord through the veil. And then having proven yourself true and faithful in all things, you are permitted to enter into the presence of the Lord… What Joseph Smith did was he lived that journey. He accomplished that walk. He made that pathway back to conversing with the Lord through the veil and then entering into the Lord’s presence. He encountered those that were opposed to the walk; he encountered those that were encouraging of the walk… That was what Joseph Smith lived. That was what he described the Restoration as having included. That was what he attempted to turn into a ritual to be housed in a temple, so that everyone in the ceremony could experience the same kind of angelic ministrants coming and talking to you and giving to you the obligation to live a higher life, and then a higher life still, and then yet another higher standard of conduct, until at last you’re purified sufficiently to come and embrace the Lord through the veil, and upon embracing Him through the veil receive from Him not a name, but a seven-fold blessing that stretches from time into eternity.”  from a Mormon History Fireside Talk on  November 22, 2015
Bountiful, Utah
The whole temple message can be summarized in one brief statement: We are to be prepared in all things to receive further light and knowledge by conversing with the Lord through the veil. The ceremony of the temple is not the real thing. It is a symbol of the real thing. The real thing is when a person actually obtains an audience with Jesus Christ, returns to His presence, and gains knowledge by which they are saved. The temple is a revelation of the process by which one may pass through the veil to God’s actual presence. The purpose of a temple is to allow the communication of great knowledge and greater knowledge to restore what has been lost since the time of Adam, in order for people to rise up and receive the Holy Order. A temple in Zion is to be a place where He can come to dwell and not merely to manifest Himself to some. Isaiah’s prophecy concerning the last days’ temple clearly identifies it as a house where man will be instructed in God’s path (see Isaiah 1:5). It will be a facility where the God of Jacob will teach His pathway of ascent back to the Throne of God. Mankind will learn the laws governing that pathway. The purpose of the coming last days’ temple in Zion is to allow the communication of great knowledge and greater knowledge, and to restore what has been lost since the time of Adam.
The temple has only one real purpose: To convey God’s promise to exalt those who experience it; provided they abide the conditions for exaltation. It...gives the initiate a promise that if they walk in the path shown to them they will arrive at the Throne of God in the afterlife.”
“A real temple [one commissioned, ordered, accepted and visited by God’s presence] becomes “Holy Ground” and the means for making available to faithful people in every state of belief and hope the opportunity to receive, by authorized means, the same covenant, obligation, association, expectation and sealing through an authorized and binding arrangement in sacred space. This is the same thing they can receive from God directly if they enter into His presence while still in the flesh. In effect, the temple becomes an extension of heaven…

Posted by BARE RECORD OF TRUTH at 2:07 PM

would you please cite the quotes from joseph? thx

The Taylorsville temple is an interesting case. They tore down a stake center to build it and have been collapsing stakes all around that area for the past decade. Hard to claim that they placed it in an area of high growth for the church, because it is the exact opposite. That part of the Salt Lake valley has been built out for many years. Hard to claim growth from new construction like in Toole, Eagle Mountain, Orem, Layton, or Payson. It would have made more sense to build it out by the Mountain View Corridor farther west. And yes, it will be very hard to staff the Taylorsville temple as there are not many neighborhoods of wealthy retirees in that part of the Salt Lake Valley. You almost wonder if they had planned to collapse a stake already, but recognized that this was a prime spot of real estate right off I-215, and members headed to the airport might question why they had abandoned a building so they built a temple instead.

When a bunch of new Temples were announced after the advice to follow "wise and thoughtful government and medical leaders" regarding covid shots, I wondered who will staff and attend all these new temples if recommend-bearing members who "follow the Prophet" get too sick, disabled, or dead from the shots to do any Temple work.

It’s all about property values and housing and economic development. Look at the companies involved with building and developing and you’ll see an alarming pattern of secret combinations emerge…

I floated a theory on another blog regarding the temples, which is tied to the end of the use of the term "Mormon" as nickname for Latter-day Saints (which I guess is another unacceptable nickname).

In any case, my theory goes like this: In 1990, then Elder Nelson gave a talk insisting on the use of the full name of the church. Six months later, President Hinckley referenced that talk and said that we'd keep using "Mormon" because people were familiar with who Mormons are.

My own opinion is that Nelson never forgave that slight and has carried it forward 30+ years. So, he brought back his insistence on using the full name of the church (and ignoring D&C 107) once he became president of the church.

As a part of that, he's trying to out build President Hinckley when it comes to temples so he can, as least historically, leave Hinckley in the dust. During Hinckley's administration, he announced 78 temples. I believe Nelson is now at 100.

I don't think it has anything to do with any actual need on the part of church members locally for more temples.

Maybe building temples is a way to offset the profits from investment gains, in order to retain non-profit status. Otherwise, the church would be little different than Berkshire Hathaway!

I have wondered the same things about the temples. On the other hand, there are no new chapels being built, even in the fastest growing areas like St. George. There are barely enough meeting houses even after switching to two-hour meetings. Our stake center is shared by two stakes. I have not seen any chapels under construction anywhere during the three years I've been here. It's bizarre.

Inspiring quotes at the end, thanks! There is actually another temple in the works in the Cache Valley area, just a few miles North of the Logan temple in Smithfield, UT: https://churchofjesuschristtemples.org/smithfield-utah-temple/

There's only one actual temple approved by the Lord and that's the one in Kirtland. All the rest are cursed for being Masonic lodges pretending to be temples of God.

Or maybe the purpose is completely different. The Mormon church is a real estate development corp. By building a temple, it raises the property values in the surrounding area. Mormons may not care about going inside, but they like the idea of having their homes in sacred space.