When President Nelson says "GOOD JOB" to his wife and it becomes a top Church News story.

A few weeks ago the Church News featured an article entitled  'How 2 words from the Prophet to his wife touched a missionary - and me.' It describes how inspirational it was for people in attendance to hear President Nelson say "Good Job" to his wife.

Here is an excerpt from The Church News story that appeared on the back cover.

"The missionary also wrote about inviting friend of the Church to hear the Prophet speak. And the missionary wrote about the joy he felt when a young man walked miles to participate in the meeting.

It was, however, another observation by the missionary that struck me. He noticed and wrote home about being touched as he heard President Nelson whisper "good job" to Sister Nelson after she spoke.

The brief, tender exchanged - as they passes between their seats and the pulpit - was a sweet acknowledgment of her effort and his gratitude. For one second - the second before he would speak - he directed attention away from himself to her.

For the missionary, the moment was a sermon between the sermons.

It is hard to describe what that meant. It was the sweetest "good job" any one of us could have imagined. " 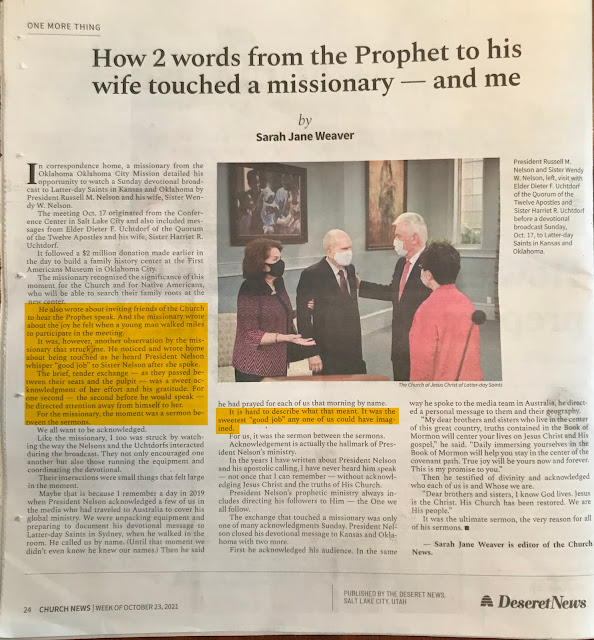 I look forward to reading the next article written when President Nelson says "THANK YOU" to his wife.

Posted by BARE RECORD OF TRUTH at 9:25 AM